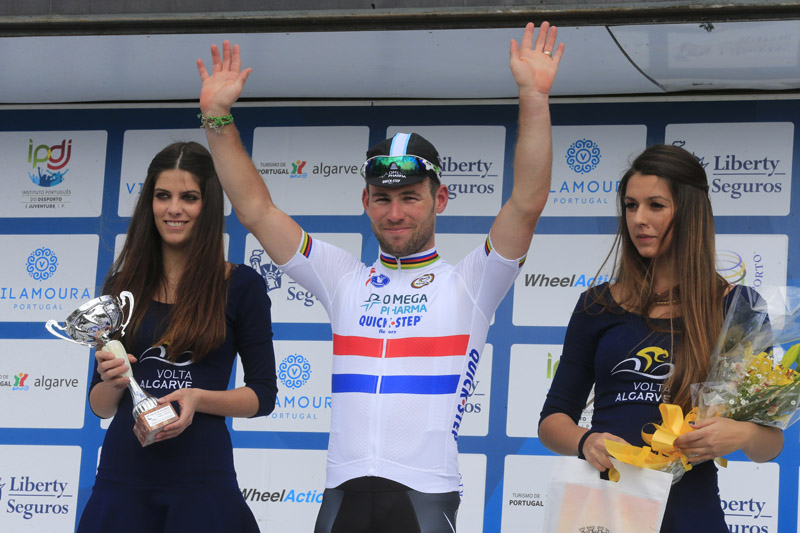 Mark Cavendish won stage 6 of the 2014 Tirreno-Adriatico in a solo finish today – ahead of his teammate Alessandro Petacchi and Peter Sagan.

Key rivals such as Andre Greipel (Lotto Belisol) and Marcel Kittel (Giant-Shimano) did not factor in today’s 189 kilometer race from Bucchianico to Porto Sant’Elpidio.

By setting a fierce pace inside the final 40 kilometers, Cannondale ensured the absence of Kittel from today’s finale, as the German rider was dropped along the final climb of the day – despite the valiant efforts of his teammates to rejoin him with the main group.

Meanwhile, Lotto Belisol contributed to the pace making along with Cannondale, as Omega Pharma-Quick Step smartly bided its time in the pack.

With 15 kilometers remaining, Omega carefully started moving Cavendish up toward the front. As the race was heading into the final 2 kilometers, as crash took place that claimed Andre Greipel’s key lieutenants, that consequently left him and Sagan with the task of closing the gap on the Omega Pharma team. However, this came at a price, as both riders were clearly fatigued when the time came to contest the sprint.

“To get the lead-out technically perfect like we did we’re super, super happy with that,” Cavendish said.

“It would have been nice to sprint against Kittel and Greipel but we’ll celebrate tonight.”