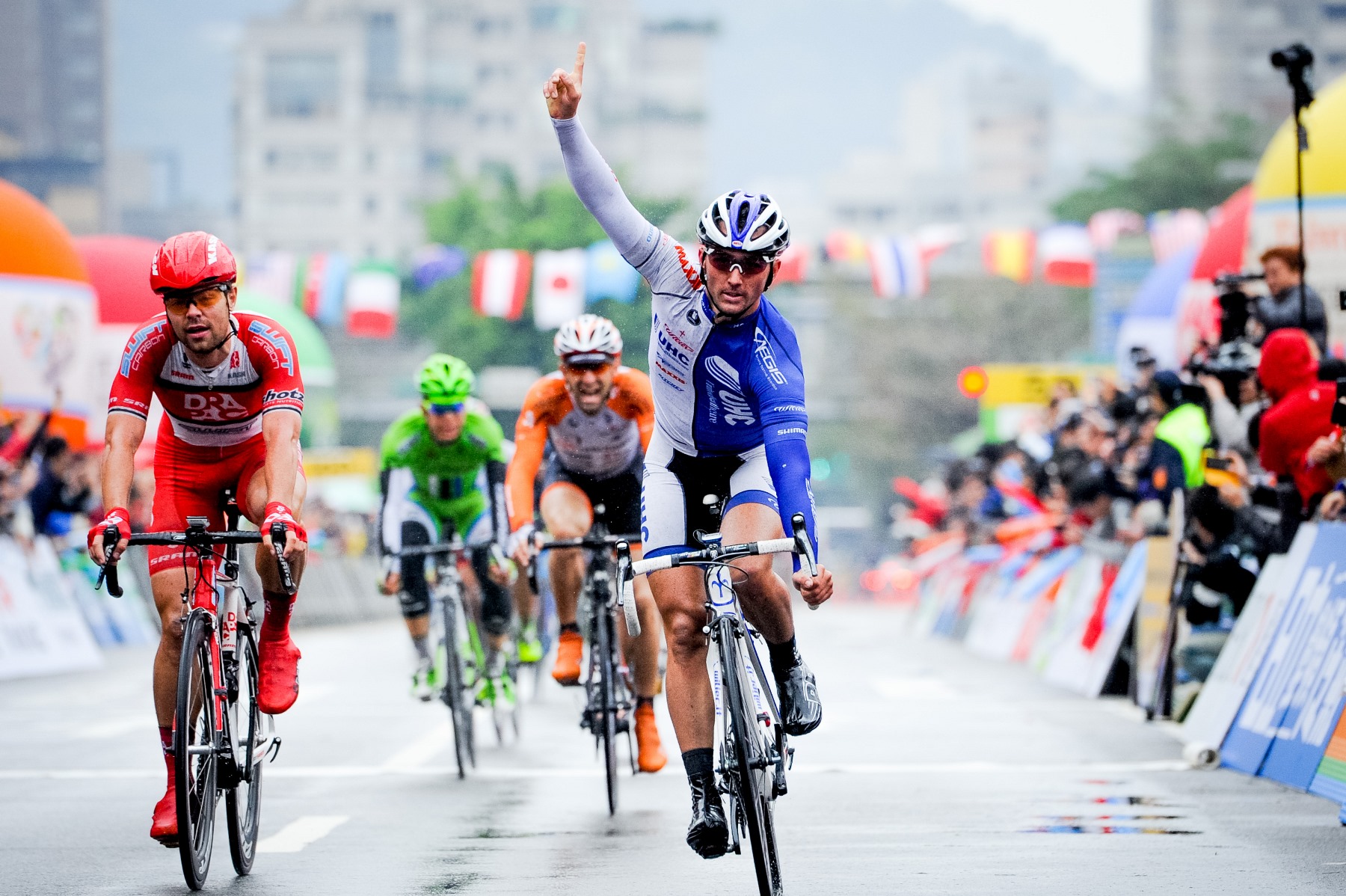 Luke Keough of Unitedhealthcare delivered a masterpiece of pure American criterium style of racing as he overcame the wet conditions of the roads to emerge as a winner of the inaugural stage of the 2014 Tour de Taiwan in front of Taipei’s city hall.

“Last year I crashed in that same stage with similar weather conditions, so I knew what to do this time”, Keough commented as he got off his bike to celebrate his first international victory. “It was a little crazy at the end with a few crashes that took some of my team-mates down. But I still had Martin Irvyne and John Murphy staying together to lead me out. They did a perfect job.”

“It’s big for us to come to Taiwan and win”, the American continued. “One of our sponsors, Maxxis, is from here. Today’s stage was a test for every part of our equipment. It’s great to keep performing in Asia. We’ve had some good success recently.” No later than yesterday in Malaysia, Uhc’s Colombian climber Isaac Bolivar completed Le Tour de Langkawi in third position overall while road captain Bradley White won stage 5.

“We have a strong team and big races coming up in Europe with wild cards for Milan-San Remo and Paris-Roubaix”, added the 22 year old from California who is known as a specialist for this kind of short, fast and flat racing. “He was lucky to be on the other side of the crashes”, noted runner up Wouter Wippert from defending champions Drapac. “I had to close a gap, so the sprint was too short for me.”

A born sprinter, Keough indicated that he might not be able to keep the jersey all the way through the five stages of the Tour de Taiwan but his team has ambitions for the overall classification with Murphy who won the 2008 edition of the race.

However, one of the hot favorites for this year took a great profit of the characteristics of stage 1. It featured only five laps and 52 kilometers with the famous tower Taipei 101 as a backdrop for the finish but Frenchman Rémy Di Gregorio of La Pomme Marseille rode away in the first lap, accompanied by Greek Apostolos Bouglas from SP Tableware.

Staying away until the last lap, they captured the time bonus of the three intermediate sprints. Having bagged seven seconds, Di Gregorio has an advantage over the other climbers ahead of the hillier stages.

“He rode very smartly, that’s exactly what I would have tried to do if I was still a rider”, noticed Taiwan’s cycling legend David McCann who is now a sport director for Synergy Baku and designated Di Gregorio as the man to beat as of now.