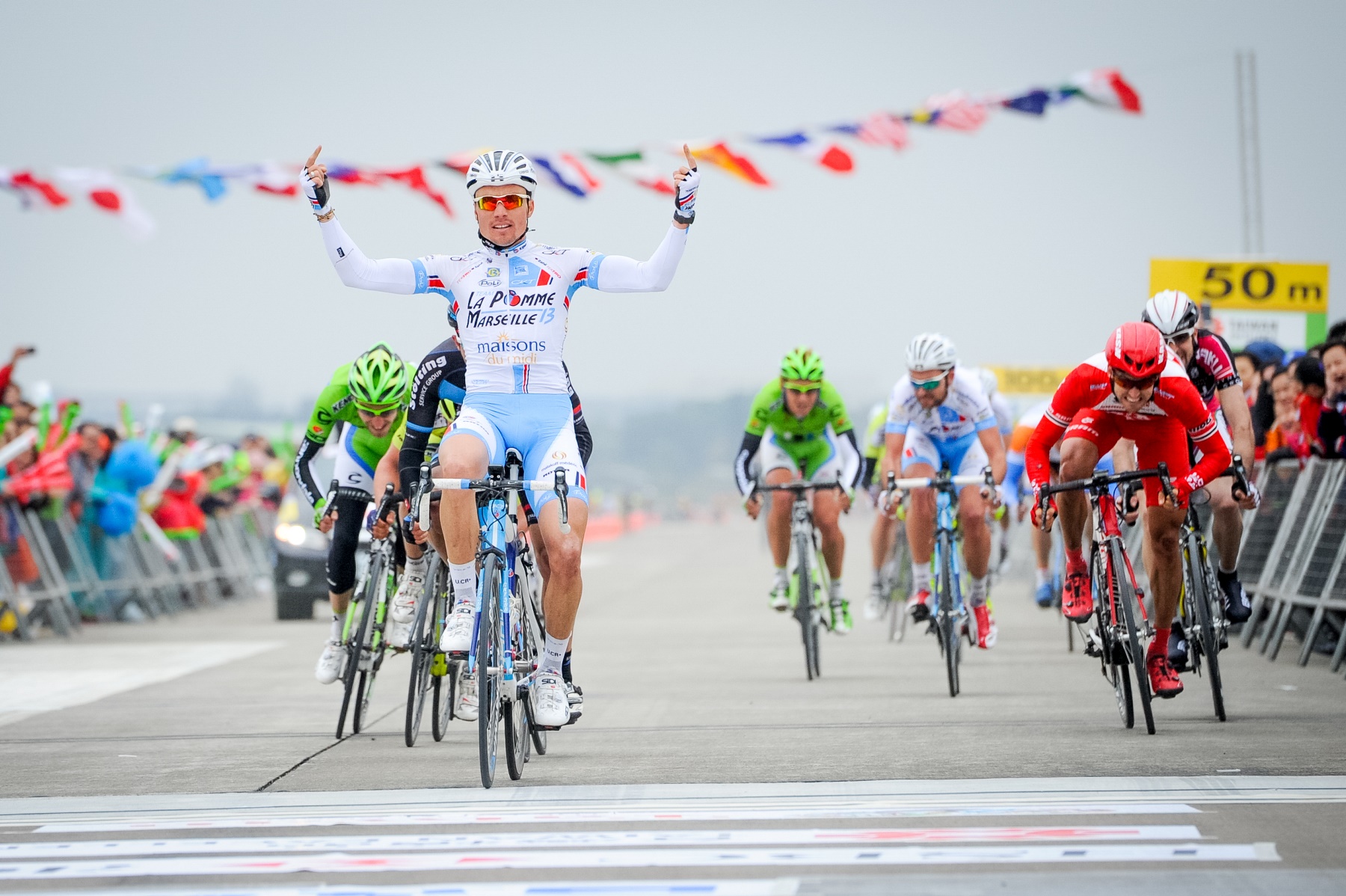 Benjamin Giraud of La Pomme Marseille won stage 2 of the 2014 Tour de Taiwan that featured an unprecedented finishing venue on an airport runway in Taoyuan today. The success was complete for his French team sponsored by Taiwanese cycles CKT as Rémy Di Gregorio took over the lead from Unitedhealthcare’s Luke Keough as he rode for time bonus in intermediate sprints for two days in a row

“I’m happy for the team”, Di Gregorio said. “It’s pretty special for me to become a race leader through intermediate sprints, as I’m a climber but not a sprinter, but I’ve realized from reading the road book that time bonus might be the decisive factor for the overall win. I’ve come here for that after riding strongly in the French early season races. I’m ambitious. But racing in Taiwan is a total discovery for me. I’m hoping that the terrain will favor my characteristics in the next two days.”

With two seconds lead over Giraud, and eleven seconds over former Tour de Taiwan winner John Murphy (Unitedhealthcare), Di Gregorio is in a perfect position for winning the first category one stage race of his career at the age of 28.

At mid-point in today’s 152 kilometer stage, La Pomme Marseille had succeeded in positioning four of it’s riders inside the 16-man lead group – that now held a 55 second advantage over the chase. And, as the race entered into the final circuit, strong winds across the Taoyuan Airport forced the peloton to give up their chase , which further extended the breakaway’s lead to more than three minutes.

“I had to remain covered until the very last moment”, commented Giraud who was known as the fastest sprinter of the sixteen leaders. As he feared to be boxed in, Di Gregorio’s former FDJ team-mate Wesley Sulzberger now racing for Drapac felt he had to open the sprint. The finishing line was only 150 metres away but it was still too far to resist to the wind. Giraud overtook him with style with just 50 meters to go.

“This is my second stage win at the Tour de Taiwan after last year’s one”, noted the Frenchman who also claimed stage victories at the Tour of Qinghai Lake and the Tour of China in 2013. “I love the racing here and this very special finishing circuit made it a very interesting one. It was a good idea to make us arrive in an airport. The route wasn’t hard but the wind made it a very difficult race today. Now we have a yellow jersey to defend. We’ll give our best to keep it.”