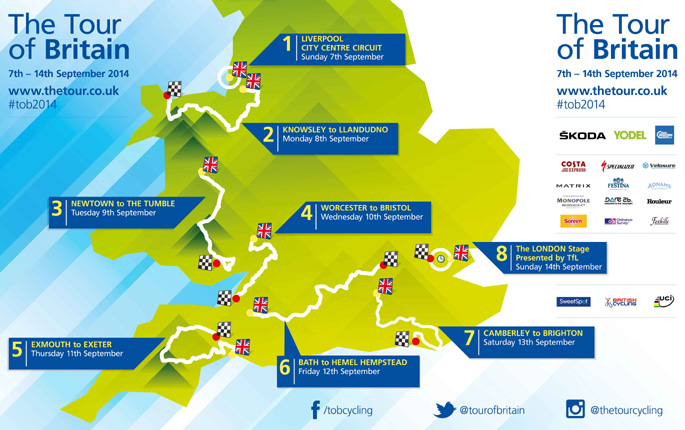 The route for the 2014 Tour of Britain, the first to be run following the upgrade to 2.HC status, will include first visits for the modern Tour to both Bristol and Brighton, as well as a summit finish on The Tumble in South Wales.

Liverpool and London city centres will bookmark the route, with the latter hosting the final stage of the race, which will include an individual time trial for the first time since 2011.

Seven new venues will welcome The Tour of Britain in September, in addition to returns to the likes of Liverpool, Worcester and Exeter to Britain’s national Tour.

"With our toughest summit finish yet, an individual time trial in London and several longer stages, this year’s Tour of Britain has a varied and testing route that will present opportunities to a variety of riders," said Race Director Mick Bennett.

"The route will again showcase some fantastic scenery, and combine major British cities with charming and picturesque towns and villages, as well as testing climbs, all of which will make for a memorable Tour." British Cycling’s Cyclesport Director, Jonny Clay, said:

"This year’s Tour of Britain is set to be the biggest and best yet and is a fantastic way to showcase the event’s new, upgraded 2.HC status.

"The Tour of Britain will not only deliver on every level for cycling fans, giving them the opportunity to see the best teams and riders in the world competing on their door step, but it is also a great day out for people of all ages. Watching the race from the roadside is free, allowing thousands of spectators to get caught up in the excitement of the event passing through their city, town or village."

For the first time since 2008 Liverpool will host The Tour of Britain, with the opening stage consisting of a ten-lap, 130km stage starting and finishing on The Strand, beneath the world-recognised skyline of the city’s Three Graces.

Stage Two, on Monday 8th September, will start from Knowsley, scene of Sir Bradley Wiggins’ time trial victory in the 2013 Tour, before heading across North Wales to a stage finishing with a lap of the Great Orme and a seafront sprint in Llandudno.

Wales will host a challenging second stage a day later heading through Powys and mid-Wales to a summit finish on the six-kilometre climb of The Tumble, above Abergavenny in the stunning landscapes of Monmouthshire.

Wednesday 10th September will see the world’s top riders racing into Bristol from Worcester at the end of a 182-kilometre leg, before tackling the one-kilometre, 10% climb of Bridge Valley Road to the finish on Clifton Downs.

A day later sees the return of the always popular Devon stage that will include the climb of Haytor on Dartmoor, which hosted The Tour’s first ever summit finish last September.

Another venue making its debut in the modern Tour is Bath, from where Stage Six will start close to the famous Royal Crescent on Friday 12th September. A 200-kilometer plus route will cross Oxfordshire and Buckinghamshire and including a challenging finale in the Chiltern Hills, ahead of a stage finish in Hemel Hempstead, Dacorum.

Brighton and Sussex will host their first stage of the modern Tour of Britain on the penultimate day of the 2014 race, marking 20-years since the Tour de France visited the city. The longest in the race, Stage Seven will start in Camberley heading through West and East Sussex before the on Brighton’s Marine Drive, which will make perfect preparations for the World Road Race Championships thanks to its distance and arduous nature. In the closing kilometres riders will also face the challenge of the climb of Ditchling Beacon.

The battle for the race leader’s yellow jersey will go down to the final day in central London, with both an individual time trial and circuit race taking place on the iconic 8.8-kilometre circuit that takes in the capital’s best known landmarks, including the finish on Whitehall.

The national launch also saw the announcement of expanded television coverage for Britain’s national Tour, with three-hours of live coverage daily, plus an hour’s highlights show on each evening in a new multi-year deal with ITV.

"The increased television coverage at home and abroad and the upgrade of The Tour to HC status firmly places The Tour of Britain among the top ten stage races in the world," said Hugh Roberts, Chief Executive of organisers SweetSpot Group.

"With our renewed relationship with British Cycling we are now in a position to build upon solid foundations going forward, opening up exciting new commercial opportunities around the London stage, and The Tour of Britain as a whole, that can only benefit the race and cycling in Britain."

The identities of the remaining teams, as well as detailed route maps from new Tour partners Ordnance Survey showcasing intermediate Yodel Direct Sprints and SKODA King of the Mountains climbs will be announced in the Summer.