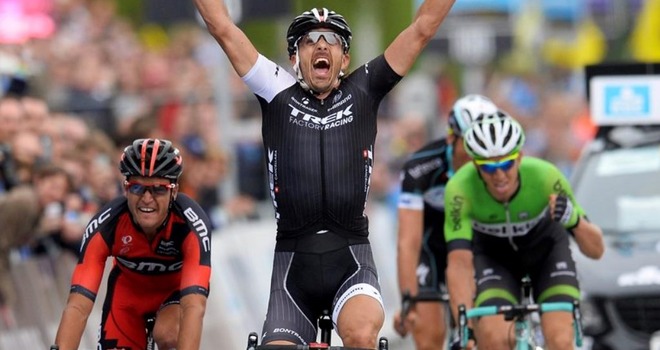 Fabian Cancellara won the holiest of the Belgian classics today, by winning the 2014 Tour of Flanders in a sprint finish against Greg Van Avermaet and Sep Vanmarcke.

The Swiss rider, along with Sep Vanmarcke attacked on the Paterberg to join forces with Van Avermaet and Stijn Vandenbergh, who had succeeded in riding clear earlier in the race.

From there, the four escapes successfully held-off a chase that was being driven by Cannondale and Omega Pharma – Quick-Step.

Meanwhile, Alexander Kristoff led the rest of the peloton home – to claim a fifth place finish.

With 35 kilometers remaining, Boasson Hagen and Dries Devenyns attempted to ride clear – subsequently building up a slight gap that lasted only briefly.

As the race reached the 31 kilometers to go mark, Van Avermaet, along with Vandenbergh succeeded in riding clear of the group.

From there, Leukemans broke free of the chase in pursuit of the two leaders.

As the escapee’s gap reached 20 seconds, Cancellara, Boonen and Vanmarcke took control of the chase. However, despite their efforts, the gap continued to grow. And, with 20 kilometers remaining, the gap had reached nearly half a minute over Leukemans and 45 seconds over the chase group.

As the chase tackled the climb of the Kwaremont, Cancellara began to up the pace in earnest, with only Vanmarcke able to follow. And, it wasn’t long before they swept past Leukemans.

Meanwhile, Van Avermaet and Vandenbergh continued pushing their pace along the cobbles of the Paterberg. From there, the BMC rider took a slight lead over his companion, as Cancellara and Vanmarcke continued to storm from behind. And, by the 13 kilometer mark, they succeeded in absorbing Vanderbergh into the fold.

At that point, Van Avermaet was clinging to just a 10 second advantage. And, a further kilometer later, he was caught as well.

Behind the four leaders, Kristoff made a valiant attempt to bridge himself to the quartet. However, he was quickly brought back by Niki Terpstra and the remaining field.

With 8 kilometers remaining, the escapees led with a 20 second advantage, with the first chase group at a half minute behind, while the main field followed at 50 seconds back.

As the group came back together, Cancellara attempted his own acceleration. However, the Swiss rider was quickly brought back into the group.

As the race headed under the final kilometer banner, a game of  "cat-and-mouse" ensued amongst the leaders. But, with 300 meters remaining, Cancellara finally surged – ultimately distancing his companions to the finish line.