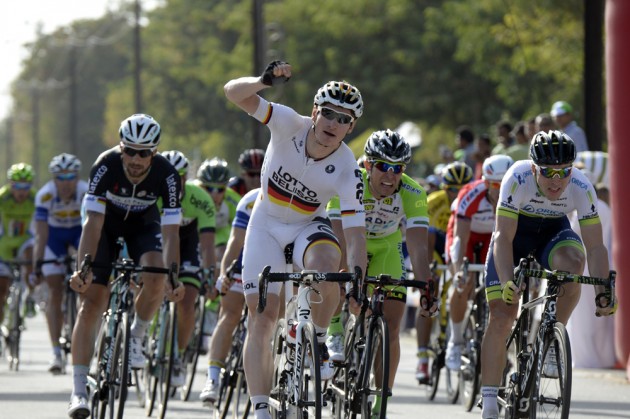 Andre Greipel won the opening stage of the 2014 Tour of Oman – beating Leigh Howard and Nicola Ruffoni in a sprint finish in Naseem Garden today.

The German powerhouse was perfectly led out by his team in the closing meters to edge out his rivals.

At the stage ceremony, Greipel dedicated his win to former teammate Oliver Kaisen, who recently retired due to a heart problem, as well as to his team for delivering him to victory.

"I don’t think any other team deserved the win like we did. We chased hard all day," Greipel said after pulling the race leader’s jersey over his white German national champion’s jersey.

Van Hecke was the first rider to crest the Al Rustaq climb at the 56.5 kilometer mark to claim the first KOM jersey of the race.

With a gap of 4:05 still remaining, the Lotto team was the first to initiate a chase – quickly followed by FDJ.

At one point, Greipel’s chances of a win in today’s stage looked bleak – as he and his team missed a critical split in the peloton at the 142 kilometer mark. However, the Belgian team managed to regain contact with 10 kilometers remaining. But, it was the Belkin team who controlled the field – as they rode into the final 2000 meters of racing.

From there, the Omega Pharma-Quick Step team appeared to be in control of the sprint. However, a miscalculation in their lead-out not only opened the door for the Lotto Belisol team to move in, but served to shield the Belgian squad from the cross-wind as well.

"There was some shelter on the right and I think Sieberg went from twentieth wheel to the front and then held the speed really high. It was a slight head wind but we could still hold them off," Greipel explained.

Today’s victory marked Greipel’s fourth win of the season, and he had this to say about Omega Pharma Quick Step’s mistake.

"You can sprint or you can’t sprint," he said bluntly. "That’s cycling, otherwise, as I always say, we should play chess."

"I trust my guys 100% and they know what they have to do. Even if Quick Step didn’t open on the right side, we could have passed them on the left. I stuck to the wheel of my teammate and we were not panicking. We had the horse power with a kilometer to go. When Sieberg started it was pretty amazing and fast. I think we deserved it."