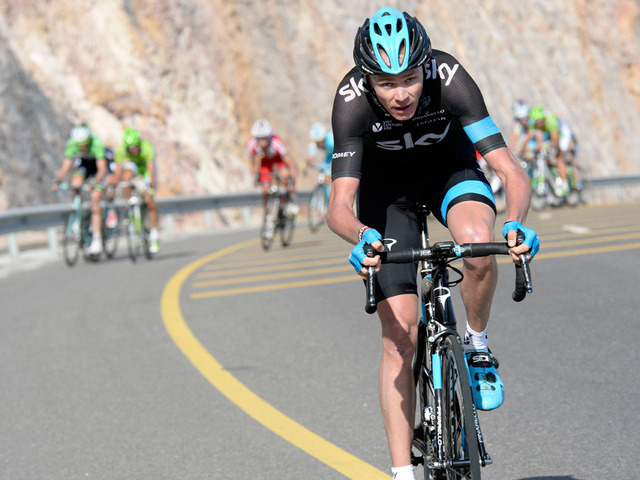 With the exception of the 5.7 kilometer climb of Green Mountain (with an average gradient of 10%), today’s 147.5 kilometer stage from Bidbid featured a mostly flat profile.

A small breakaway group that was first initiated by John Murphy, and later joined by Marco Canola, Thomas Sprengers and Preben Van Hecke, came together at around the 9 kilometer mark. And, within a kilometer, the group had opened up a gap of a little more than a minute over the peloton.

Van Hecke won the first intermediate sprint points at the 50 kilometer mark – beating Sprengers and Murphy, and effectively taking over the most aggressive rider’s jersey from his teammate Jelle Wallays, who previously held a two point lead over him.

After 100 kilometers of racing, the escapees still held a gap of 3:13 over the peloton – despite team Cannondale and Katusha upping the pace back in the main field.

With 20 kilometers remaining, Chris Froome and Rigoberto Uran came to the fore and took control over the pace – subsequently reducing the gap to 2:18.

Van Hecke won the final intermediate sprint at the 11.5 kilometer mark – sealing his title as the most aggressive rider in this year’s race. However, all along the peloton had been chipping away at the escapee’s lead. And, by the 10 kilometer mark – they held only a 38 second gap, as the peloton continued it’s pursuit in earnest.

As the race reached the foot of the Green Mountain climb, the escape group was absorbed by the peloton – setting the stage for a showdown amongst the climbers.

From there, Froome launched one of his trademark accelerations, for which no one could respond.