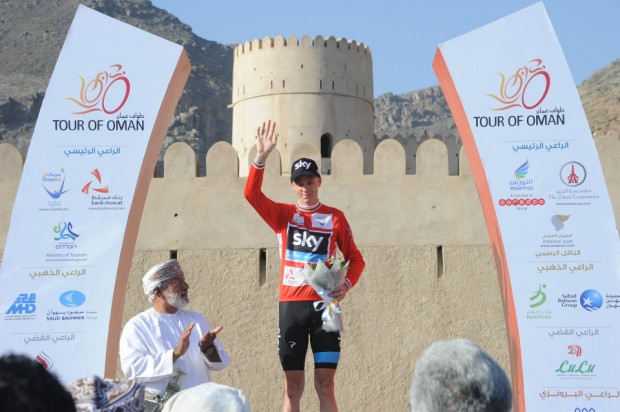 André Greipel won the 6th and final stage of this year’s Tour of Oman – holding off Nacer Bouhanni and Sam Bennett in a sprint finish in the Omani capital of Muscat today. Meanwhile, Chris Froome finished safely in the peloton to seal the overall race victory – ahead of Tejay van Garderen and Rigoberto Uran.

Today’s 146 kilometer stage from As Sifah to Matrah Corniche featured a little of everything. The first part of the route was a mix of rolling terrain that led riders to the climbs of the Al Jissah and Bousher Alamrat – just as they had done in stages 3 and 4, while the second half was mostly flat. The stage ended with two laps around a 7.5 kilometer finishing circuit in Muscat.

Lightart was the first of the escapees to crest the Al Jissah climb after 31km of racing. At that point, the breakaway group had established a lead of 1:35 over the peloton.

However, from there, the Orica-GreenEDGE team initiated a chase – that quickly brought the escapee’s lead down to just 28 seconds by the 38 kilometer mark.

The gap continued to remain around the 30 second mark for another 10 kilometers. However, as the escapees were about to be caught, Terpstra launched an attack on his own, crossing the line at the first intermediate sprint point.

After 60 kilometers of racing, the group had established a 1:05 lead over the peloton. And, by the time they reached the bottom of the Bousher Alamrat climb at the 68 kilometer mark, they had increased their advantage to 2 minutes. However, at that point, a concerned peloton began to set a furious pace on the steep slopes in an attempt to chase down the escapees.

Indeed, this spelled the end for the breakaway, as all but Hepburn and Bazzana were caught by the peloton.

Attacks from within the peloton continued to occur in hopes of reeling in the remaining two riders – with Christopher Juul Jensen being the sole rider who was able to bridge himself to the duo.

With 33 kilometers remaining, the peloton gradually began increasing it’s pace – ultimately reducing the escapees’s lead down to 45 seconds – as the race entered the capital of Muscat.

At the 5 kilometer mark, the break was still holding at 20 seconds. However, a determined peloton who was now in full pursuit of the escapees – caught them just as the race crossed under the "flamme rouge". From there, the race came down to a sprint for the line, with Greipel once again proving that he was the strongest rider of the bunch.