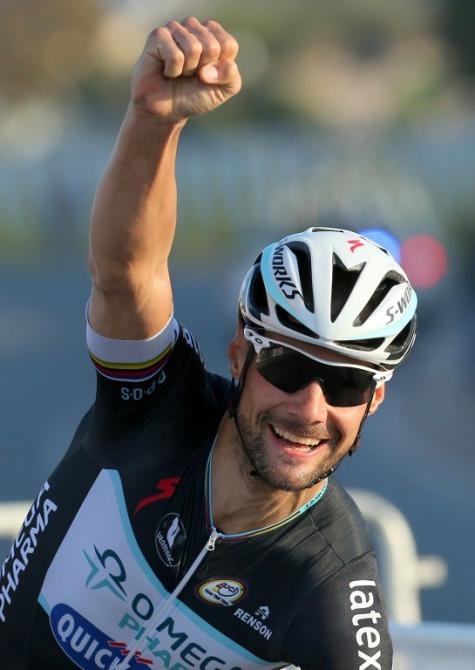 After a day of very fast and dramatic racing, Tom Boonen beat Andre Greipel in a photo finish today – to claim stage 4 of the 2014 Tour of Qatar.

Despite heavy crosswinds, the peloton managed an average speed of 52km/h during today’s 135 kilometer stage from Dukhan to Mesaieed. And, despite the field breaking up into various groups throughout the race, all of the key protagonists succeeded in keeping themselves in contention.

Indeed, by the 6 kilometer mark, the peloton had already split into four different groups – with the first two groups establishing gaps of 20 and 30 seconds over the field.

The first intermediate sprint of the day got underway at the 60.5 kilometer mark; wherein Michael Mørkøv beat Jurgen Roelandts and his teammate Karsten Kroon.

Following the intermediate sprint, the second group managed to regain contact with the leaders. However, the third group still remained a 1.30 back.

Shortly thereafter, Philippe Gilbert, along with Jarl Salomein went on the attack. And, at one point the duo managed to open up a gap of more than half a minute over the chase.

However, the Omega Pharma-Quick Step followed from behind with an attack of it’s own – subsequently splitting the chase into two groups and swallowing up Gilbert and Salomein in the interim.

Fabian Cancellara and Arnaud Demare were two of the riders who were caught in the second group 20 seconds behind – while Omega Pharma-Quick continued to drive the pace at the front.

At that point, disaster struck for Boom who suffered a puncture in the lead group – only never to regain contact with the leaders. Meanwhile, Cancellara had a similarly ill-timed mechanical problem that caused him to fall out of the second group.

With a bit of assistance from Luke Rowe, Iljo Keisse and Stijn Vandenbergh took turns swapping on and off the front. However, this was little more than a show, as the Omega Pharma was still controlling the pace of the lead group.

With 2 kilometers to go, Orica-GreenEDGE hit the front hard – trying to set up it’s rider Aidis Kruopis for the sprint. And, as Australian team appeared to be well-positioned just the under the final kilometer banner, Sieberg, Roelandts and Greipel moved into position with Boonen right on their wheel.

From there, the Lotto team began moving into position as well. And, for a moment, Boonen got lost in the jostling. However, his teammate Fenn managed to bring him back onto Greipel’s wheel just at the right time. And, when the German champion launched his sprint, Boonen was right there to edge him out for the win.

With the bonus points in today’s stage, Boonen moves into 2nd place in the overall classification – 18 seconds behind his teammate Niki Terpstra.

After a disastrous day for Lars Boom, the Belkin rider lost his third place position in the GC.

Racing continues tomorrow – with a 159 kilometer stage that brings the peloton from Al Zubara Fort to Madinat Al Shamal.