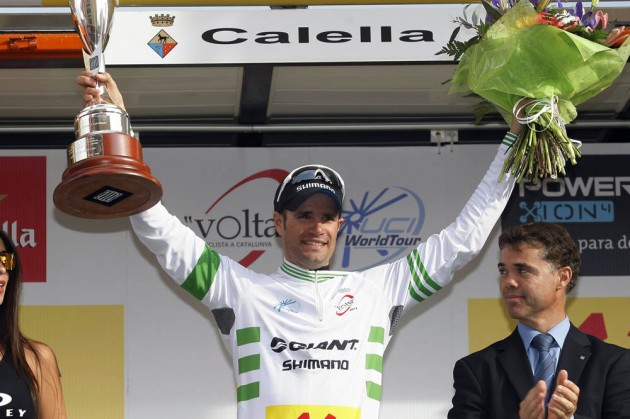 Luka Mezgec scored back-to-back wins in this year’s Volta Ciclista a Catalunya, by claiming stage 2 in a sprint against  Roberto Ferrari and Daniele Ratto in Girona today.

As a result of today’s victory, the Slovenian rider picked up another ten seconds to extend his overall lead in the general classification.

Today’s stage was inundated with heavy rain, as such, there were a number of accidents that occurred within the first 10 kilometers of the race. However, despite the confusion, a breakaway group containing Maxim Belkov (Katusha), Michel Koch (Cannondale), Thomas Voeckler (Europcar), Tomasz Marczynski (CCC Polsat Polkowice), Marek Rutkiewicz (CCC Polsat Polkowice) and Jérôme Baugnies (Wanty – Groupe Gobert), managed to get underway. And, by the 45 kilometer mark, the six escapes succeeded in building up a lead of almost 2 and a half minutes over the peloton.

Meanwhile back in the main field, Team Sky, along with Giant-Shimano, were busy pushing the front – keeping a close watch over the breakaway group.

As the peloton continued chipping away at the breakaway’s  lead, after losing more a minute and a half at the 26 kilometers remaining mark, Baugnies decided to pick up the pace within the ranks of the escapees. However, Voeckler decided to initiate a counterattack of his own – subsequently riding clear and building up a lead of almost a minute over his breakaway companions.

At that point, Giant, Orica GreenEdge and Trek began moving toward the front of the peloton as the race entered into the remaining 18 kilometers. Up in the breakaway group, Belkov continued leading what remained of the escapees, while  Voeckler still managed to hold onto a 50 second lead, as the race headed into the penultimate climb of the day – with less than 10 kilometers remaining.

Shortly thereafter, the peloton succeeded in reeling in all of the escapees but Voeckler.

As the race headed into the final ramp before the long road into Girona, Voeckler was still holding onto a 20 second lead.

However, the peloton finally came to bear upon Voeckler in the closing kilometers, all the while, teams were ushering their respective sprinters to the front. As the race headed under the red kite banner, Orica began winding up the pace with the goal of setting up their man Leigh Howard. However, the Australian rider fell victim to Mezgec, Ferrari and Ratto who initiated a  perfectly timed surge for the finish.