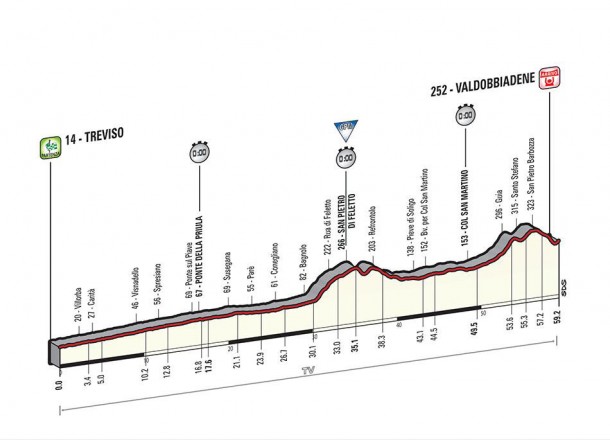 Organizers for the Giro d’Italia, RCS Sport, officially announced the details of the 2015 route today.

Next year’s Italian Grand Tour will feature a 59.2 kilometer time trial  midway in the race.

“It’s not an easy Giro d’Italia with 44,000 meters of climbing,” race director Mauro Vegni said. “The time trial is long, but based on the climbing both before and after the time trial stage, I think it’ll balance well with the mountains and not risk favoring the time trial riders over the climbers.”

The next year’s time trial marks the Giro’s longest since the 60.6 kilometer course back in 2009.

The Giro d’Italia first featured a time trial event in 1933, a 62 kilometer stage that was won by Alfredo Binda. Fausto Coppi won the race’s longest time trial of 81 kilometer in 1951.

The Giro often favors climbers, largely due to it’s high-mountain stages through the country’s Alps and Dolomites.

Indeed, climbers will find plenty in store for them in the 2015 route,  with several mountaintop finishes (six in 2015), including Abetone, Madonna di Campiglio, Aprica, Cervinia, and Sestriere.

In addition to the lengthy time trial event, the 2015 Giro will feature three long stages that exceed 200 kilometers, with the longest being the a 263 kilometer route to Fiuggi.