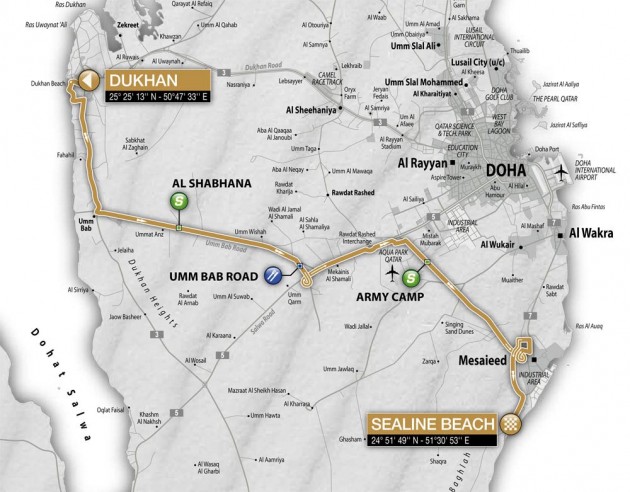 Caution to the wind! The six stages of the 2015 Tour of Qatar (February 8-13) will only give sprinters one opportunity to relax: a 10.9 km individual time trial near the brand-new Lusail Sports Arena, where the World Handball Championship is set to begin tomorrow in front of over 15,000 fans. Apart from this hiatus on the third day of racing, the race will be a sprint-fest… unless the fast men are blown away by the wind, which often gives the Qatari event a whiff of the Flanders Classics.

Etixx – Quick Step has turned the Qatari desert into its stomping grounds, claiming seven of the last nine editions with riders such as Tom Boonen (four times) and Niki Terpstra (last year), but the opposition in the fourteenth edition of the Tour of Qatar will be fierce. Rivals for the mass sprints include Marcel Kittel (Giant-Alpecin), Alexander Kristoff (Katusha), Peter Sagan (Tinkoff-Saxo), Nacer Bouhanni (Cofidis), Arnaud Démare (FDJ) and newly crowned Australian champion Heinrich Haussler (IAM Cycling). If it all comes down to a duel in the crosswinds, Fabian Cancellara (Trek Factory Racing), Lars Boom (Astana), Greg Van Avermaet and Philippe Gilbert (BMC) will not go down without a fight. All-rounders such as Edvald Boasson Hagen (MTN-Qhubeka), Alejandro Valverde (Movistar), Matti Breschel (Tinkoff-Saxo) and Filippo Pozzato (Lampre) will be ready to pounce on any opening left by the sprinters and spring classic specialists. The multifaceted Bradley Wiggins (Team Sky), winner of the 2012 Tour de France and last year’s time trial world championship, is also heading to Qatar to build his condition for Paris-Roubaix, which will be the last road race of his career and his top season objective.