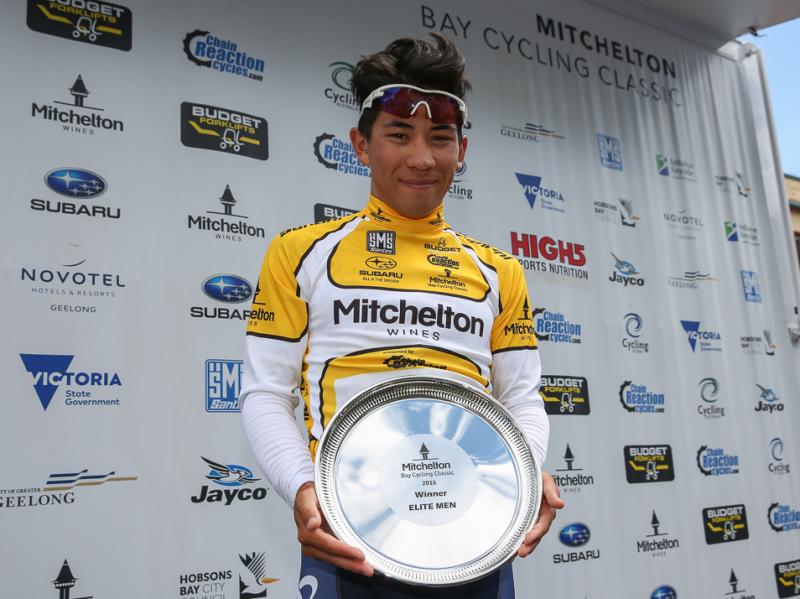 04 Jan 2016
By Campionissimo - In LATEST ARTICLES, THE GREAT RACE

The fourth and final stage of the Mitchelton Bay Cycling Classic proved the class of Caleb Ewan (Orica GreenEDGE), continuing to build his profile as one of the world’s most promising sprinters.

Around the street circuit at Williamstown his Orica-GreenEDGE teammates controlled the race and set it up for a bunch sprint, which Ewan won comfortably ahead of Brenton Jones (Drapac Professional) and, teammate, Alex Edmondson (Orica GreenEDGE).

At just 21 years of age it was Ewan’s 10th career stage win and third overall title in the Mitchelton Bay Cycling Classic.

Caleb Ewan –“The boys were so strong and I think you could tell today that they rode the whole race on the front, and that makes it smoother and easier for me and they delivered me perfectly. I went close to that fence, but kicked through the last corner and knew that I had it. Getting a few wins at the start of the season gives you a massive amount of confidence going into the next races, but I don’t feel any pressure going into the nationals.”

Second overall went to Brenton Jones with Pat Shaw (Avanti Isowhey) in third, and the green jersey, for the points classification, was won by Robbie Hucker (Avanti Isowhey).

A two-man breakaway featuring sprint classification winner Robbie Hucker (Avanti IsoWhey) and Josh Taylor (State of the Matter / MAAP) went off the front early. The duo proved unable to extend their advantage beyond a handful of seconds. A solo move countered the catch of the early break, but the gap was short-lived.

By the mid-point of the race, the field was back together – and it would stay together until the race’s conclusion. The yellow jersey, following his teammates’ wheels, was always near but never on the front.

From there, the duo would establish an insurmountable advantage of more than a minute that would hold until the finish.

Meanwhile, the yellow jersey of Gracie Elvin (Orica-AIS) finished safely in the peloton to win the series overall.

“I’m just so happy to get the overall win and the first win of the season,” said Williams. “It’s exciting times for our team, I think.

“We were fine to come down to a sprint. We were to set up a solid lead-out for Sarah Roy and keep Gracie up there, but I also had an opportunity to take a chance.

“I could tell I was feeling good on the rollers,” said Williams. “You can just tell if you’re going to have a good day. I was like – I’m going to go full-gas and see what happens. And it worked.”

Williams managed to rid herself of Leth during the waning minutes of today’s race, as she soloed  across the line to take her first win of the season.

“I was doing the easier turns,” admitted Williams. “[Julie] was doing the turns in the wind. I had a good tailwind turn. We were sharing the load, working really well, but I could tell she was struggling.”

In the meantime, Kajihara Yumi (Novotel Geelong/Japan) slipped away from the peloton just before the finish to claim the final spot on the podium, while stage 3 winner, Valentina Scandolara (Alé Cipollini), brought home the rest of the field – beating Elvin in the bunch sprint.

“I’m really proud of myself and the team,” said Elvin. “[Winning the series is] something I wanted to do at some point in my career but probably not this year. To have done it now is awesome. I’ve set myself up for the rest of the year with a lot of confidence.”

Elvin and her teammates will head to Buninyong to compete in Australian road championships next week.

“I wanted to stay a little bit under the radar this week and just ride around for form, but I think I’ve got a big target on my back again,” said Elvin with a laugh. “I’m really looking forward to the road race at Nationals. It’s going to be a great one – especially with the live coverage.”

“We’ve got a few options,” added Williams. “We’ll use our numbers to our advantage. We just want to take the jersey to Europe. It doesn’t really matter who.”