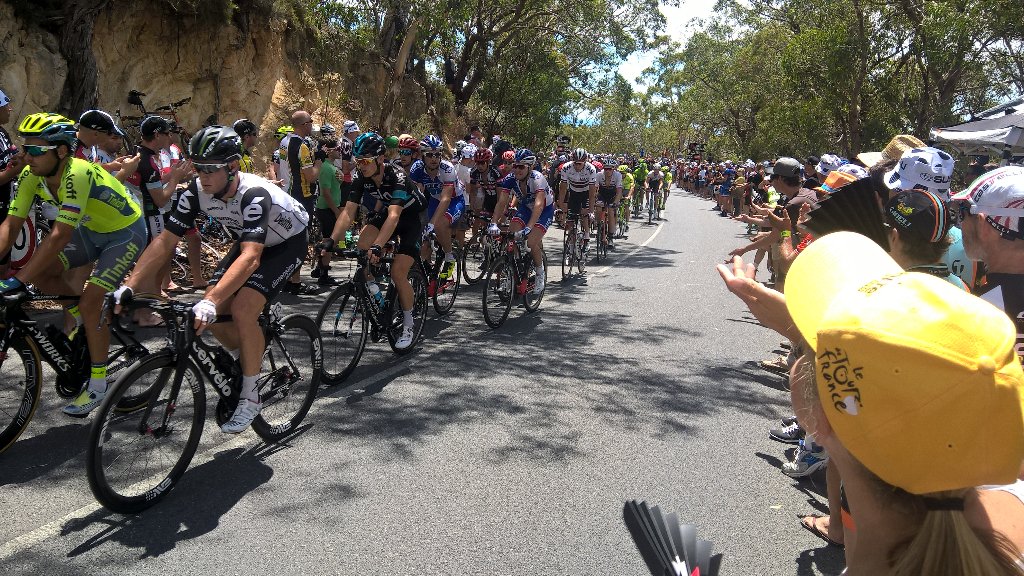 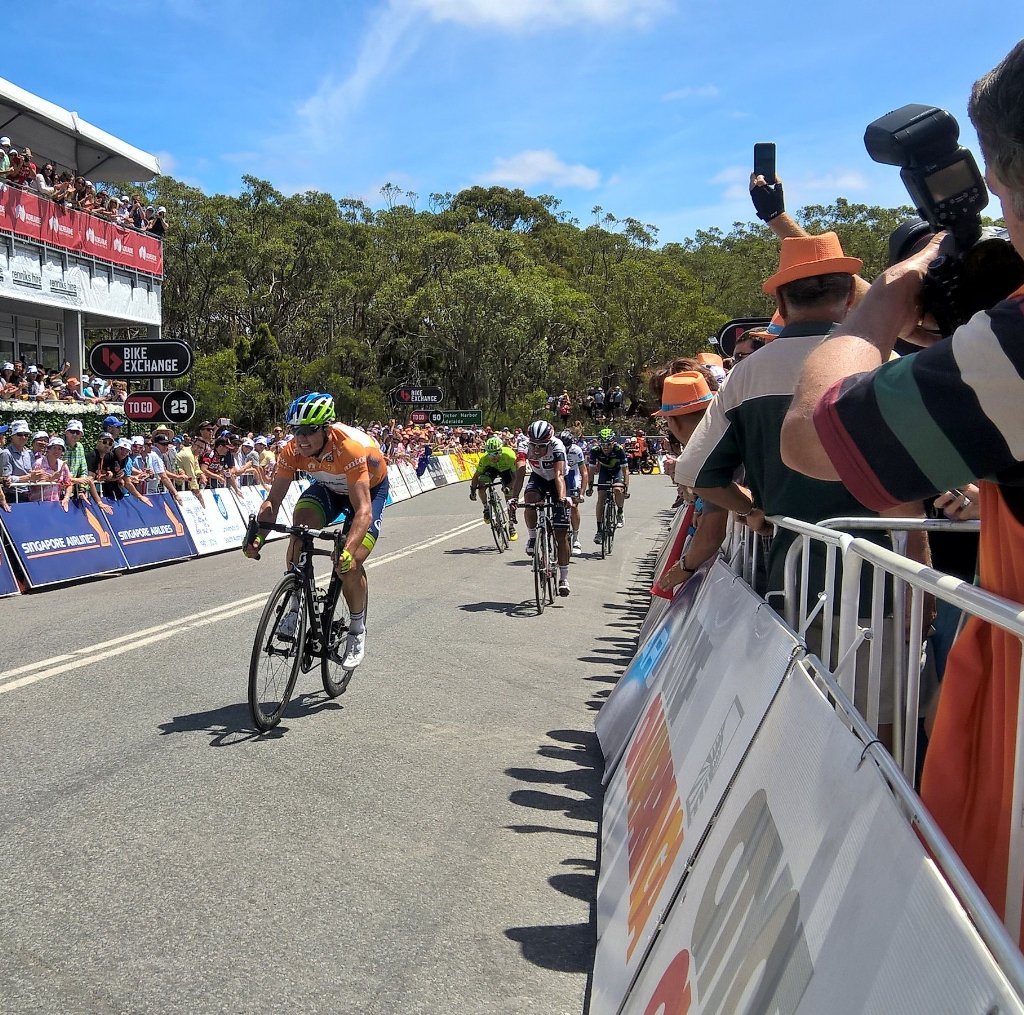 Richie Porte triumphed on Willunga Hill for the third straight year to take out the BikeExchange Stage 5 of the Santos Tour Down Under while Simon Gerrans looks set to claim a fourth Tour crown.

All the major contenders were together when the race hit the bottom of Willunga Hill with just three kilometres to go in the 151.5 kilometer stage through the McLaren Vale wine growing region.

A flurry of attacks splintered the bunch but it was the surge of speed, a kilometer from home, by BMC Racing’s new recruit, that proved decisive.

“To be honest I never expected that one,” said Porte who finished well ahead for a solo win. “Today the BMC guys were absolutely incredible and they backed me here, which is nice and I have only just started in this team.

“It’s always nice to win in Australia and on top of Willunga for the third time in a row, I am really happy,” said Porte. “The crowds are just incredible, the Australian public just get behind this race so much. It really does feel like riding the Tour de France up this climb, incredible feeling.”

Porte’s win moves him into second place overall, nine seconds, behind Gerrans who dug deep in defence of his lead and will almost certainly secure a record fourth Tour title. The Orica-GreenEdge rider crossed the line in eighth place, 17 seconds behind Porte but close enough to retain the Santos Ochre Leader’s Jersey.

“It was extra tough,” said Gerrans. “The calibre of climbers in this race, those three guys who attacked off the front, they’re some of the best in the world, it was bloody tough.

“You never discount Richie Porte in a finish like that, he obviously loves it and this is the toughest stage of the race where the GC (overall) is genuinely decided every year,” said Gerrans who has the trophy within reach. “One stage to go, I have come out just in front today, hopefully that is enough.”

His quest for a fourth win will be strengthened by Porte’s concession after the stage.

“I’m not going to fight for time bonuses tomorrow,” said Porte of the possible maximum sixteen seconds on offer in the Be Safe Be Seen MAC Stage 6. “That’s not my forté. I’m already happy with how this race went (because) I wasn’t targeting the overall.

“It’s just nice to get the first win in the BMC jersey,” said Porte of his first stage race with his new team.

Canadian Michael Woods (Cannondale) responded to Porte’s attack talking Colombian Sergio Luis Henao (Team SKY) with him but either was strong enough to bridge the gap. Henao then got the better of Woods in the final metres to clinch second place, six seconds behind Porte.

“It was a very hard stage,” said Henao who now holds an unassailable lead in the Subaru King of the Mountain classification. “I tried to follow the wheel of Richie, but it wasn’t meant to be.

“I believe we did a good job and you’d always like to win but I had good sensations,” said Henao who’s moved up to third overall, 11 seconds off the lead. “My rivals are very strong, and I wasn’t able to win, but it’s a good sign that I am off to a good start to the season.”

Woods came home third on the stage, nine seconds behind Porte, and has moved up to fifth place overall.

“I felt very good today, I just wasn’t as strong as Porte,” said Woods. “I tried going with him, but I made a little mistake by trying to do it by myself, and I took Henao with me, and that cost me second in the stage.

“(But) I can’t be disappointed with the week,” he said. “The crowd is amazing here, I’ve never done the Tour de France, but everyone is saying it’s the same level of crowds.”

Dropping out of the top three overall today was Jay McCarthy (Tinkoff) who earlier in the week was the race leader after his win into Stirling.

“I’m a bit disappointed to get off the podium but I gave everything today, I (just) didn’t feel great,” said McCarthy who is now sitting fourth overall at 20 seconds but leads the Europcar Young Rider competition. “The team put me in a good position, I had just to keep pushing and I definitely have no regrets.

“I’ve won in Stirling and I’ve stayed pretty close to the first place overall. Being fourth I still take a lot away from this race and I’m happy with how the week went so far.”

BikeExchange Stage 5 was always set to be a classic Santos Tour Down Under showdown and the 122 thousand fans who flocked to the race were not disappointed.

Milder temperatures and a sea breezes made for comfortable viewing as the race wound it’s way through the Fleurieu Peninsula vineyards, along the coast and then onto the Willunga Hill finishing circuit.

As the race headed down to Aldinga Beach for the first of three loops back through McLaren Vale the cross winds wreaked havoc. The peloton lined out single file with several riders flicked into the gravel at the back of the race.

Meantime up the road a quartet had ridden clear to try their luck.

With Ligthart trailing the race leader by only 1min49sec he soon became the leader on the road as the breakaway stretched its lead out past two minutes but it also meant he was a threat too the success of the break.

The margin had grown to 5min40sec by the time the leaders reached the first iiNet sprint of the day at Snapper Point after 63.4km. Ligthart led them over the line ahead of Janse Van Rensburg with Boom (Astana), third.

The quartet’s lead stayed fairly constant for the next 50 kilometers with Orica GreenEdge directing traffic on the front of the bunch in support of Gerrans, who was riding nestled amongst his team mates.

The second iiNet Sprint was again won by Ligthart ahead of Janse Van Rensburg with Boom taking third place this time through.

The peloton was almost six minutes behind at the halfway mark of the stage which is when the chase moved up a gear and the gap began to shrink.

Janse Van Rensburg broke clear for the first Subaru King of the Mountain contest up Willunga Hill claiming the maximum points followed by Boom, Oliveira and Ligthart in that order.

But the chase was gathering momentum and the next rider under the Subaru arch, Astana’s Lieuwe Westra, was only a little over two minutes behind.

The quartet regrouped after the first climb in last ditch bid for stage honours but they couldn’t match the speed of the peloton.

SKY, BMC Racing, Tinkoff, Cannondale, Lotto Soudal, and, of course Orica GreenEdge hit the gas in pursuit of the leaders and four kilometres from home the job was done.

It was then a battle for position as the big guns prepared to fire on the final climb to the finish line.

“We were up the road with a group of pretty strong riders,” said Janse Van Rensburg who was named the Alpecin Most Competitive Rider of the stage. “We had quite a big gap and when we went to Willunga Hill the first time I was feeling very strong.

“But the gap was coming down quick and they just rode me down again,” he explained. “It was a good try (but) unfortunately I couldn’t finish it off.”

2015 Tour Champion Rohan Dennis dropped out of contention for the overall placings today.

“I told the team that I didn’t think I will be ready to hold it, so our best bet was to put the leadership with Richie,” said Dennis. “Maybe we could set him up for the stage, or even the GC.

“I am not in the same shape as I was last year after the lead up to my hour record attempt gave me a little more punch.

“I am fitter in some ways, but not in others and my punch is not quite as good as it was last year,” Dennis said.

Tomorrow’s Be Safe Be Seen MAC Stage 6 will bring the 2016 Santos Tour Down Under to a close and it is primed to be an action packed two hours of racing in what is traditionally a massed sprint finish across the line. 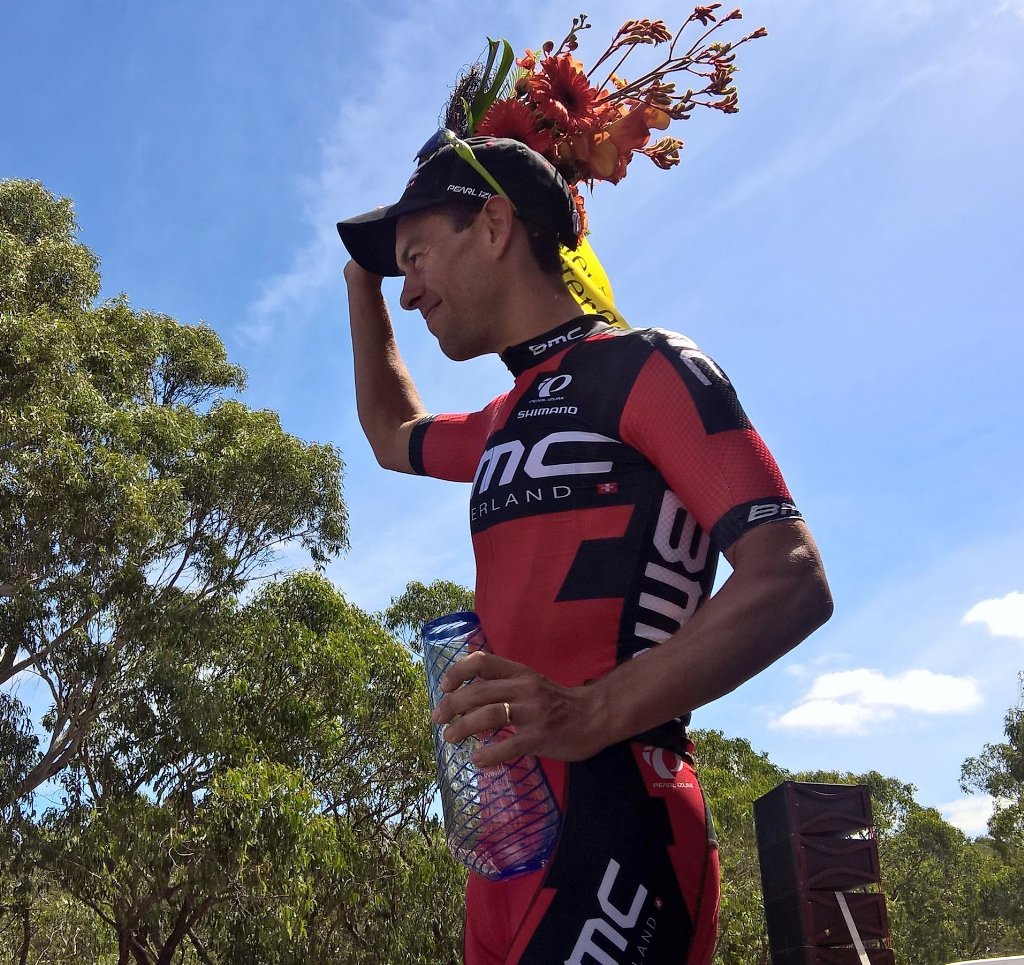