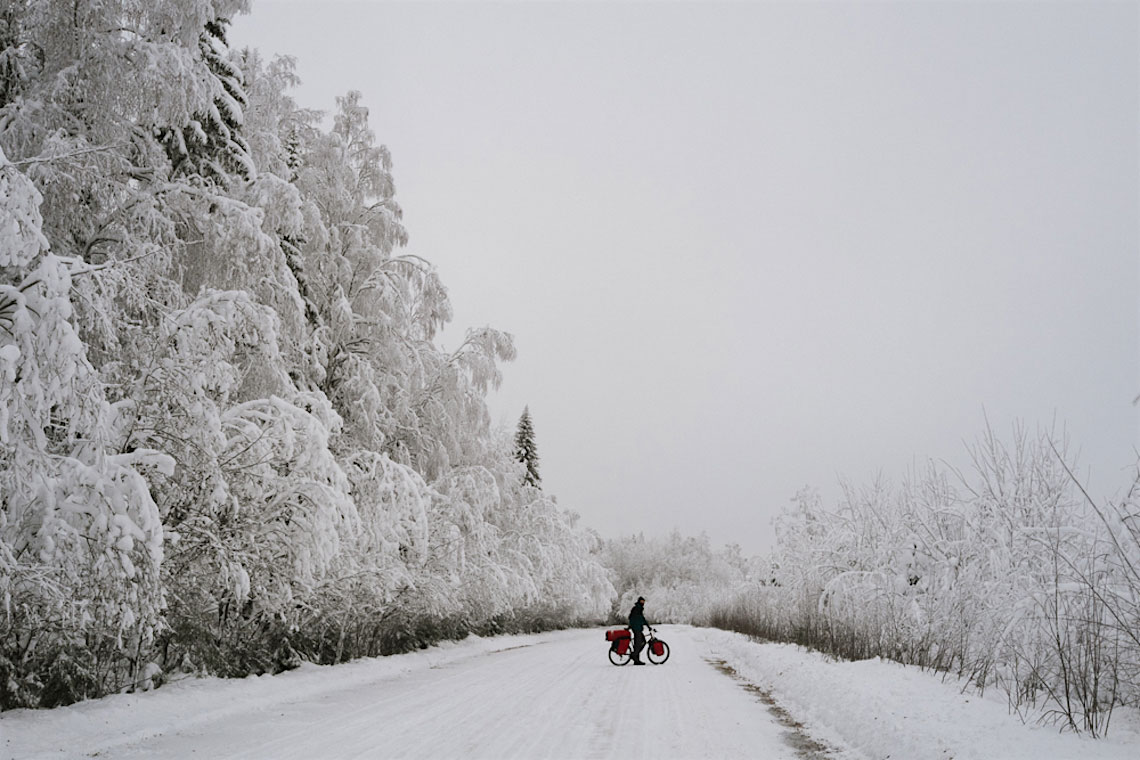 Here is their story:

Karelia was a convenient location for both friends to get to from their cities. Andrey and Alexander decided to start from there and then go wherever they would be able to — say, Vottovaara mountain, the highest spot of the west Karelia hills. It is said to be of a spiritual, somehow magical value, and different shamans or television people tend to come there a lot. They pray, dance, hug each other and seem to have a great time. But for the guys the definition of a great time is different — they were planning to get an unforgettable travelling experience and take a look at the wonderful Karelian nature in winter. And that was quite a challenge!

Alexander says he doesn’t like long preparations and looking up all the information beforehand — it’s boring. He brought to Karelia all the things he usually takes in a trip, including fun stuff like a slingshot. The guys were planning to spend their evenings shooting bottles, as it gets dark at 4PM and they wouldn’t be able to cycle anymore. But they never got a chance to use it, because all the stones were buried deep under the snow.

As for equipment and munitions, the guys did acquire some useful items. If you travel to the place where the temperature gets as low as -20 degrees, you have to think of extra warm cloths and winter sleeping bags. Alexander even got a Kona Hahanna bike from a Polish guy on eBay specially for this trip, and was very content with this choice. Andrey took care of cooking supplies and capacious bicycle bags. His bike he had assembled before, when he was preparing for a Norway tour he undertook last summer.

On the morning of December 27 Andrey and Alexander separately arrived to Petrozavodsk and spent a night at a friend’s place. The following morning at 8 they hopped on their bikes and the journey began.

They were following the so-called ‘old’ road, it’s a bit on the left from the main route Kola and has less busy traffic. Most of the time the guys were occupying the whole passage. It would be impossible to go on this road in summer — there is crushed stone as road surfacing and way more cars then, so the guys would have to breath dust all the time. However in winter the road is not perfect either. There were a lot of bumps like on a washing board, so you are jolted like crazy and after a few kilometres your shoulders are in pain. But the road was being cleaned regularly, so the guys at lease didn’t get stuck in snow hills.

The first two nights were memorable for the most severe weather conditions in the whole trip — it was -25 degrees. The guys had to spend them in their tents as there was nowhere else to go. Andrey was more lucky, because he took care of a special winter time sleeping bag, while Alexander had to get by with his 2 thin ones. He would put on his wool socks, wrap himself up in sweaters and other cloths and use a small portable heater, which was supposed to work for 7 hours but in fact was useful only for the half of that time — just enough to take a nap. But even then Alexander would have problems — with Andrey’s snoring or scary noises outside.

“The second night I woke up from cold and heard how benches were cracking in the forest, and the sounds came closer and closer and then something fell on the top of our tent — very loud. I freaked out and started calling Andrey, but he was still snoring peacefully. So I had to survive all this horror alone. It was the only time in my life when I actually felt this primal fear that makes you run away and never look back. But I told myself it was a big bird that just decided to sit on the tree next to our camp. And let’s imagine I run out of the tent, then what? I wouldn’t last long at that temperature anyway”.

Despite constantly interrupted sleep, the guys woke up every day at 6AM without an alarm clock and let themselves stay in warm and cozy sleeping bags for two more hours before getting up and making breakfast.

In the morning a cup of tea was enough. But the guys had serious problems with cooking. The gas camping stove they had stopped working at -5 C. So they had to warm the cylinder up in the campfire or under the cloths. But they didn’t have water — it would have frozen immediately. That’s why they were melting snow, but they say it tastes like empty water. The tea made with it was horrible, besides there was always some stuff like leaves or small benches floating. For lunch Andrey and Alexander usually had bulgur with vegetables or lentil soup, delicious but simple meal.

Waiting for the water to boil the guys were dancing around to keep themselves warm. The most difficult part was to keep warm the fingers and toes. They say you can get used to the cold, but when you enter any warm place the whole body starts hurting. Then you get out and feel all these -20 degrees to the fullest. So it was safer just to stay outside.

‘We were greeting all the people on our way’, Alexander says, ‘but they didn’t seem to like us. I guess, in summer it’s ok to ride a bike, but in winter we looked like complete idiots to them.’ The guys were expecting the locals to be more nice and hospitable, but they had a lot of troubles trying to find a place to sleep in Girvas, nor at a warm house neither even at a cattle shed, where it would still be warmer than outside. Nobody wanted to let them in for just one night even for money. At some point Andrey decided to ask at the library and met a nice woman there. ‘Librarians are all very kind, like mothers’. The woman was ready to help, but she was leaving town that same day. So she started calling someone, but the people on the other side of the phone called the guys idiots one more time and refused to help.

The church was closed, people at the post office didn’t want to let the guys sleep inside either. Finally, they caught a woman closing the door of a small local club. She was willing to the guys a shelter in a small room inside the club. There was no heating, and the temperature in the room was about -5 C, but the guys instantly got warm. They cooked dinner and had a nice long sleep.

‘All the time we were laughing about how we would die. Like: don’t forget to take a picture of me being eaten by a bear, so you can post it later on Instagram! But then we heard about the wolves that killed a dog the other day, it wasn’t that funny anymore’. New Year 2015 Andrey and Alexander wanted to celebrate at Yustozero, where is was supposed to be safer. One of the locals mislead the guys and when they realised that the closest village was in 30 kilometres (and they went 40 km a day in average), it was already getting dark. So they just went straight ahead by the road in complete darkness for several hours. Eventually they arrived at Sovdozero. Out of 20 houses only one was lit up from inside. But the guys decided not to knock, as the people were supposed to be celebrating New Year already. The guys found a place to put their tents nearby and had their small party: shared a cup of tea, 5 candies and leftovers from morning rice and tinned stew.

After a while the guys realized their mobile phones lost connection and they wouldn’t be able to call their relatives and friends on the New Year’s night. And New Year in Russia is considered to be the biggest and the most important holiday of the year. Alexander wrote in his journal then: “The forest is scary. The phones don’t work. Everything that was frozen is now melting and dripping all over us. The boots are completely wet. I’m gonna celebrate New Year sleeping. Can’t call my parents. It doesn’t feel nice at all”. At 1AM some people started making fireworks and the guys woke up from the noise. For a while they were watching the tent above them changing colour from red to pink. It was a warm night, they had a good sleep. When they guys woke up the next morning they realised they spent the New Year’s night right at the local graveyard. They just packed all their stuff, said that they were sorry out loud and left.

As soon as Andrey and Alexander could use their phones they called their family and found a message from a man named Boris who was offering them any help they needed. He lived in Porosozero and that was exactly the guys’ next destination.

Boris, a man of about 40 years, was willing to give the guys a whole house that had a real stove in it. Boris took them to the nearest supermarket, where they got food and — finally — some beer. They guys didn’t take any alcohol with them — it’s strongly prohibited to drink when it’s that cold. Boris went somewhere and then returned with traditional New Year’s dishes, a jar of raspberry jam and a lemon. The guys dried their stuff, spent a night and moved on to the next point — Gimoly. There they met a group of drunk women, who started swearing at them. But the guys were lucky to find a place to sleep and the next day one of the locals took them to Petrozavodsk for a good amount of money. From there Andrey and Alexander were supposed to catch a train to go back home. It was January 3, they had spent 6 days on the road.