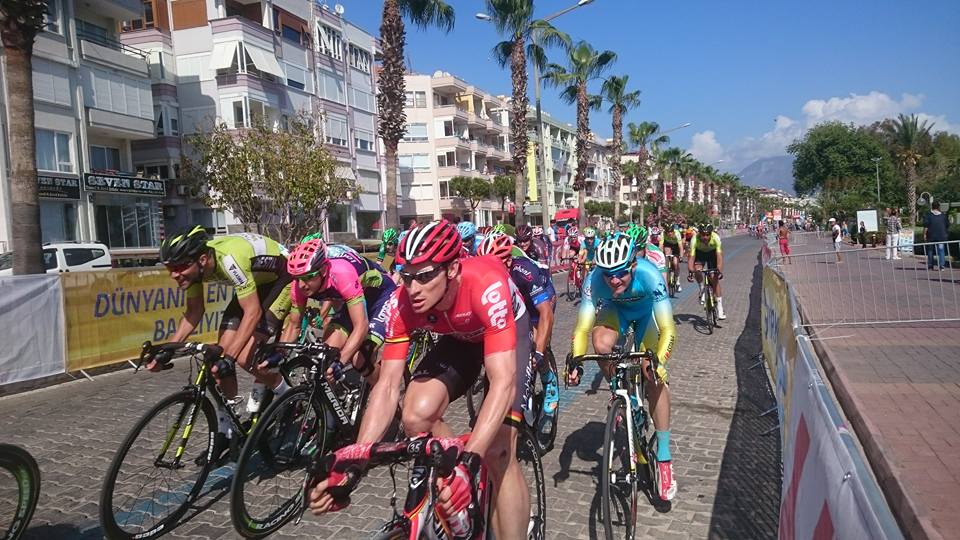 Sacha Modolo claimed stage 4 of the Tour of Turkey today, marking the Italian rider’s first victory of the season.

The Lampre-Merida rider managed to outsprint Daniele Colli, Marco Zanotti, Manuel Belletti and Jakub Mareczko on the line to seize the stage honors.

Meanwhile, yesterday’s stage winner, André Greipel, found himself isolated during the finale, leaving the German rider unable to contest the sprint, and relegating him to eighth place.

“This victory was necessary for several reasons,” Modolo said. “This year I’ve been feeling strong since the beginning. I’ve been close to the win on a few occasions but beaten by [Elia] Viviani at the Dubai Tour, by [Mark] Cavendish at the Tour of Qatar, I’ve made a couple of top 10 at Tirreno-Adriatico, I fell with 5km to go in Milan-Sanremo and I crashed again as I came here, during stage 1 in Istanbul and quite heavily as well. My morale wasn’t at its best. I was in pain on stage 2 but as I felt better yesterday I missed the split. A rider like me had to be at the front when echelons were made. So I was pissed off with myself but only the victory was missing.”

Cieslik would later attack his breakaway companions again at the 40 kilometer mark, taking Malaguti and Van Luijk with him.

From there, the trio succeeded in extending their advantage out to 2:20 over the chase.

However, a determined peloton under the auspices of Lotto-Soudal, soon began chipping away at the escapee’s gap. And, it wasn’t long before all but Malaguti were reeled back in, leaving the Italian rider out front alone until the final 5 kilometers.

“A bit of intelligence was required to win this sprint,” the Italian rider commented. “It was a non-linear sprint because everyone waited for Lotto-Soudal to launch it but with 700 meters to go, the bunch slowed down. Zanotti’s team [Parkhotel Valkenburg] took over and I followed his wheel but it slowed down again at 400 to go. I thought I had lost the sprint but Belletti opened it and I passed him.”

“In the finale, Greipel and Modolo were the riders to watch for the sprint,” runner-up Colli said. “Maybe there was a way for me to beat Modolo. I came back to him but I couldn’t do more.”

“It’s nice to be part of a fully Italian podium,” Zanotti echoed. “My team has helped me all day. Sven [Van Luijk] was in the breakaway and the others protected me before they put me in the best position for sprinting. Even though I don’t often win races, they trust me. There are great sprinters here. It’s not easy to beat them. But every day we try and maybe one day they’ll make a mistake so we’ll take the top price.”

Meanwhile, the Caja Rural-RGA team of race leader Pello Bilbao enjoyed an easier ride from the Anatolian plateau to the Mediterranean Sea than the day before.

“The start was really fast,” the Basque rider said. “We didn’t want to let a too big group go. I don’t think Lampre-Merida was trying to get a revenge when Niemiec and Koshevoy attacked. There’s nothing personal. I just believe they have other goals now, like breaking away or taking mountain points. We collaborated with Lotto-Soudal because they wanted the same thing as us. At the end, it’s a great day for us because we want the situation to remain the same until stage 6.”