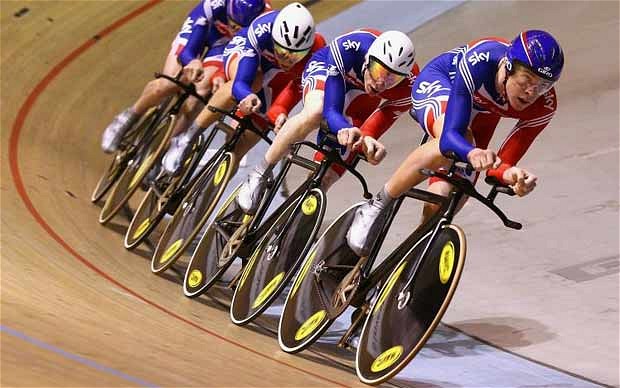 Here’s an interesting article from our friends at decaironman-training.com

10 INNOVATIONS THAT WILL CHANGE ELITE CYCLING

In the mold of high budget R&D in Formula 1, cycling teams are seeking pioneering new ideas designed to give their athletes the competitive advantage they need to win medals on the world stage. In the build up to Rio 2016 national teams are all considering novel training, recovery strategies or aids, equipment or apparel, all designed to get gold both on the track & on the road – or in the case of the French coaches probably just to beat the British.

So today I wanted to look at embryonic innovations, after all with 2 years left to run, developments in the sports science literature now will be the applied differences in competition when it all kicks off in the Flemengo Park road race on 6th August. Of course that is not to say you won’t seen these developments in the build-up – any one else see that British Cycling won the bid for the 2016 track World Championships ?

Before we get started, I just wanted to say as cool as hydraulic disc brakes are – ‘maintaining high consistent braking performance regardless of the weather conditions through innovative heat management and brake power that can be tuned to riding conditions, terrain, riders’ size and abilities’ – if you can buy equipment on the web, it doesn’t make the list.

Ok that is a bit dramatic….Mr Wiggins won’t actually be wearing real shark skin. But as this Royal Society paper illustrates the skin of fast-swimming sharks exhibits riblet structures aligned in the direction of flow that are known to reduce skin friction drag in the turbulent-flow regime. These structures have been fabricated for study and application – both replicating and improving upon the natural shape – leading to a maximum drag reduction of nearly 10 per cent. That is huge.

Interestingly not only does the paper mention methods for selecting optimal riblet dimensions based on fluid-flow characteristics and current manufacturing techniques, but notes the presence of a small amount of mucus on the skin. It seems that the ‘localized application of hydrophobic materials will alter the flow field around the riblets in some way beneficial to the goals of increased drag reduction’…..aka our athletes suits may be a bit slimy.

Don’t believe me? Note the interview with Chris Boardman at 7minute 54sec below…..

for drag reducing clothing and aero ducted helmet. As you will read, firstly the helmet design uses a pair of front inlets that channel air through internal ducts which then combine into a single rear outlet. This is to avoid laminar flow from separating on the surface and thus increasing drag. The same technology is utilized by Boeing in the form of tiny holes in the tail of its new 777x aircraft to smooth airflow – after Prof Purnell stint as head of Technical Development at Brisitish Cycling do you reckon we will have a guy from NASA?

Mr Merckx may have to sit down before we break the news about an electric motor in a helmet2. Sprint training at high altitude.

Finally to add a bit of spice to any helmet debate, the innovation team may even put an electric motor powered by a battery incorporated beneath the hard shell. I guarantee by 2020 Olympics we will be looking at the helmet mounted displays – like what you see in pilot helmets. I am telling you it will only take a BAE tech guy to join the guys in Manchester velodrome. It could also spell the end of rider instinct to join breaks in the Tour de France – much like, as many would argue, team radios. Computer, can you tell me the probability of those riders bonking up Alp d’Huez based on their power output, food intake and body positioning? As touched on in last months’ 16 page ebook on "Innovations in Cycling Science through Big Data" Formula 1 is already developing computer processing power to predict car positioning for the whole track – and by that I mean all the team cars – why shouldn’t we predict the same for a cycling, with feedback on-screen to the rider?

Back to the shark skin. The second weapon in the ‘British Cycling team’s arsenal’ is 3mm raised chevrons or ‘kicks’ as labelled by the inventor of drag reducing clothing, Robert William Lewis. This moulded plastic is placed 50mm apart on the rear of the arms and legs pointing upwards.

According to the patent the best overall results were obtained with 9 reversed chevron kicks on the arms. Ok well it isn’t quite shark skin but with some late nights in the lab team and we will get there.

And more to come on altitude training, cold suits that are ‘better than steroids’, lasers, and for crying out loud stop talking about the wind tunnel testing, its rubbish!