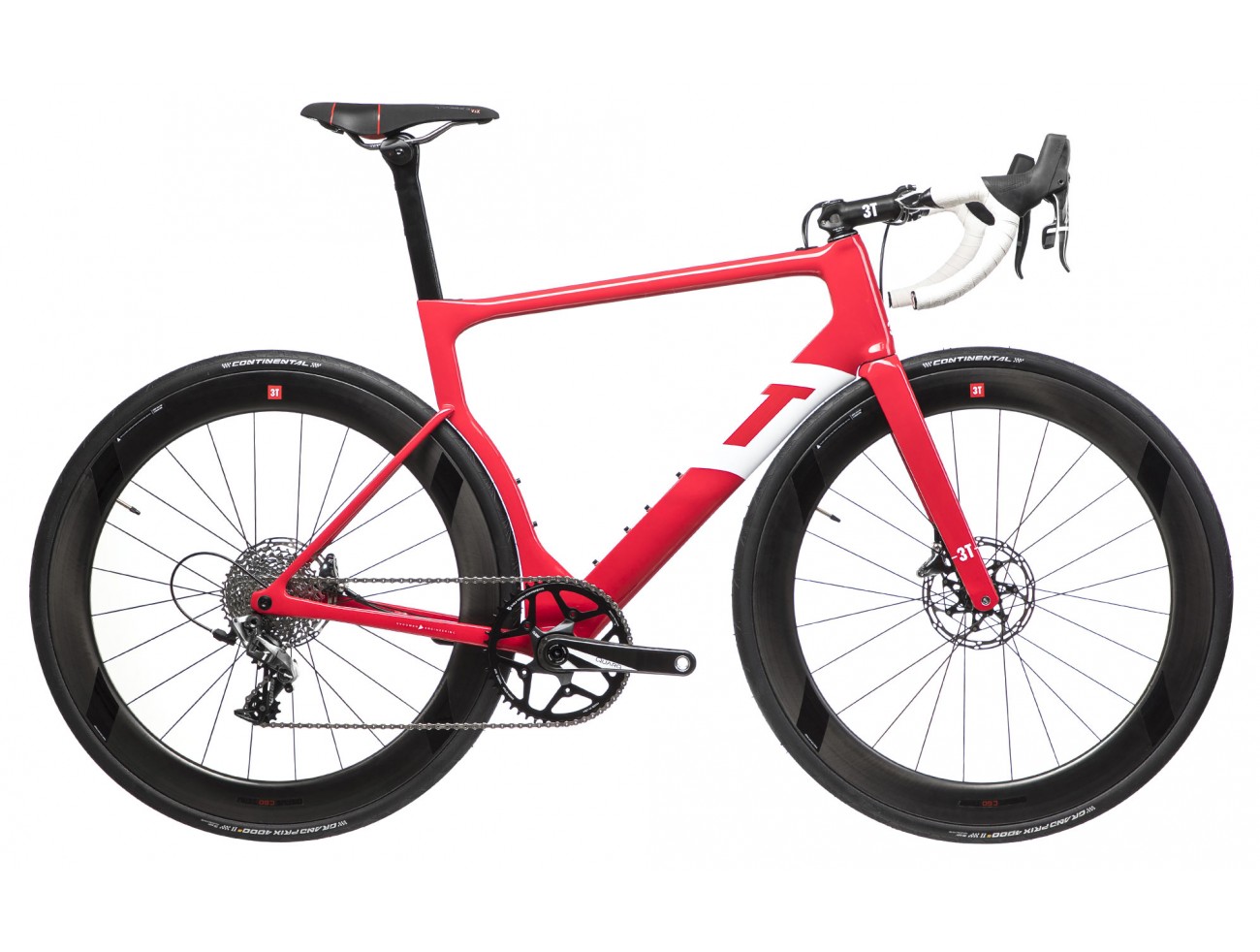 Capitalizing on the whole aero bike trend, which shows no signs of streamlining anytime soon, 3T claims its new STRADA reinvents the virtues of off-road adventure cycling (i.e. gravel grinding) and cheating the wind, by offering a 1X drive chain, flat-mount disc brakes and clearance for tires up to 30mm – in a traditional road bike platform.

According to 3T, the STRADA’s 11-36 cassette, along with a single chainring, provides the same range of gears as a compact crankset. However, in order to eliminate the huge steps in gears, the company was required to create its own cassette, which features single tooth steps for the first five cogs.

While details of the new STRADA continue to unfold, the prominent features include 3T’s new flat-mount disc brake Fundi fork, its MIND GAP aerodynamic tube shapes and profiling technology and their HIDE-RATION design, wherein the frame’s downtube is shaped to hide the bike’s two water bottles from the airflow.

3T says the STRADA frame weighs in at a respectable 970g in a size for medium, while the Fundi fork tips the scales at 395g with an uncut steerer.

The STRADA will be available in sizes S/M/L/XL, with availability starting in July.

3T will be offering the STRADA as both a complete bike, or frameset only.

The frameset will sell for $3800, while pricing for compete bikes is to be announced.

Since 1961, 3T has never been satisfied with the status quo. Always searching for ways to make cycling faster and more fun, we have constantly reinvented our products, ourselves and cycling. That started the day Mario Dedioniggi founded Tecno Tubo Torino to make the world’s best & most beautiful handlebars. And it can be found in every 3T bar, stem, seatpost, saddle, fork, crank, wheel and frame since. Mario’s spirit – to try what others dared not – continues today under the stewardship of a fourth generation.

The most recent reinvention from 3T was the EXPLORO, the world’s first aerodynamic adventure bike, an unlikely mash-up that is vintage 3T and an instant classic. Now 3T has done it again, reinventing the aero road bike from scratch with the STRADA. But “aero road” doesn’t do it justice, as it’s not just extremely aero but also very comfortable. How can one bike be both? The key elements are tire size optimization and a paradigm shift for the drivetrain, combined with a lightbulb moment designing new aero shapes.

The biggest factor in road bike comfort are the tires; they provide more compliance than any other part of the bike. Wider tires are better at reducing shocks from cracks, curbs, cobbles and potholes, which is why they are the norm at Paris- Roubaix. Wider tires also have lower rolling resistance, because their shorter contact patch requires less bending by the casing.

In addition, wider tires offer an advantage on long and multi-day rides, reducing the steady drain on a rider’s energy level caused by high-frequency road buzz. But aerodynamics are also important on such rides, and wide tires tend to test poorly in the windtunnel. However, that is to be expected if you test them with frames and parts optimized for narrow tires. The STRADA is the first aero road frame optimized for wider tires, so finally you can be fast and comfortable all the time, from the cobbles to the climbs. All day, every day, with one and the same bike.

With all aero road bike developments of the past 20 years, the drivetrain was never really tackled. So we did. The worst area aerodynamically is around the BB, with the frame, crank, chainrings, front derailleur, water bottles and rider’s legs leaving little room for the air to pass through. A single ring drivetrain eliminates the front derailleur and one chainring, reducing frontal area, creating space for unobstructed airflow and freeing up the design of the seattube to shield the rear wheel even better (no front derailleur mount needed). And with modern cassettes (in particular the special 3T cassette coming soon), you still have all the gears you need.

Think about it, 30 years ago we had 12 gears (2×6) of which only 8 were unique (the rest overlapped). Now we’re at 2×11, always assuming that more is better. But did the “improvement” from 2×10 to 2×11 really make that much of a difference? Sometimes more is not better, it’s just more; more weight, more drag, more gear overlap and more complexity. So instead of 2×11 with 14 effective gears, a front derailleur, a second ring and a second shift lever, 1×11 gives you the gears you need, the range you need, fewer components, less weight, less drag and less hassle.

At 3T we design for real world aerodynamics at realistic speeds. Sometimes that clashes with conventional wisdom, even on something as fundamental as aero tube design. Aero tubes are designed based on a series of flat 2D cross sections that connect together into a tube shape. But in the real world, the air flowing over a tube doesn’t follow a flat path, it follows an arc. So we built our Arcfoil tubes as a series of curved instead of flat Sqaero cross sections. These exactly mimic the arc of the actual airflow at several points along the tubes and substantially lower the drag (the arc of the downtube logo pays hommage to exactly the airflow and cross section arc there).

The Sqaero airfoil sections of the seatube arc for a different reason, to perfectly cover the rear tire and reduce the turbulence. Seatpost, headtube, even the seatpost clamp and dropouts are optimized aerodynamically in sometimes unexpected ways based on our real world analysis (for example you may wonder why the area behind the lower headset isn’t faired; the answer is simple, because the air doesn’t flow horizontally there but spins off the front wheel almost vertically, so a horizontal fairing shape is counterproductive as it blocks the upward airflow).

The Fundi has an ultra short-stack crown, which combines space for 28mm road tires with a lower crown height. This improves stiffness and moves the front wheel closer to the downtube, creating a perfect transition for the airflow. This makes not only the Fundi itself very aero, but also helps the front wheel and frame become more aero.

The crown smoothly transitions into the Sqaero profile of the legs, combining aerodynamics with better stiffness properties. The Fundi supports flat mount disc brakes with the 140/160 mm disc adaptor completely integrated into the fork leg shape. The kinked left leg connects all the relevant points in the most direct way possible, not only a visually striking design but also key to achieving a low weight and a minimal frontal area.