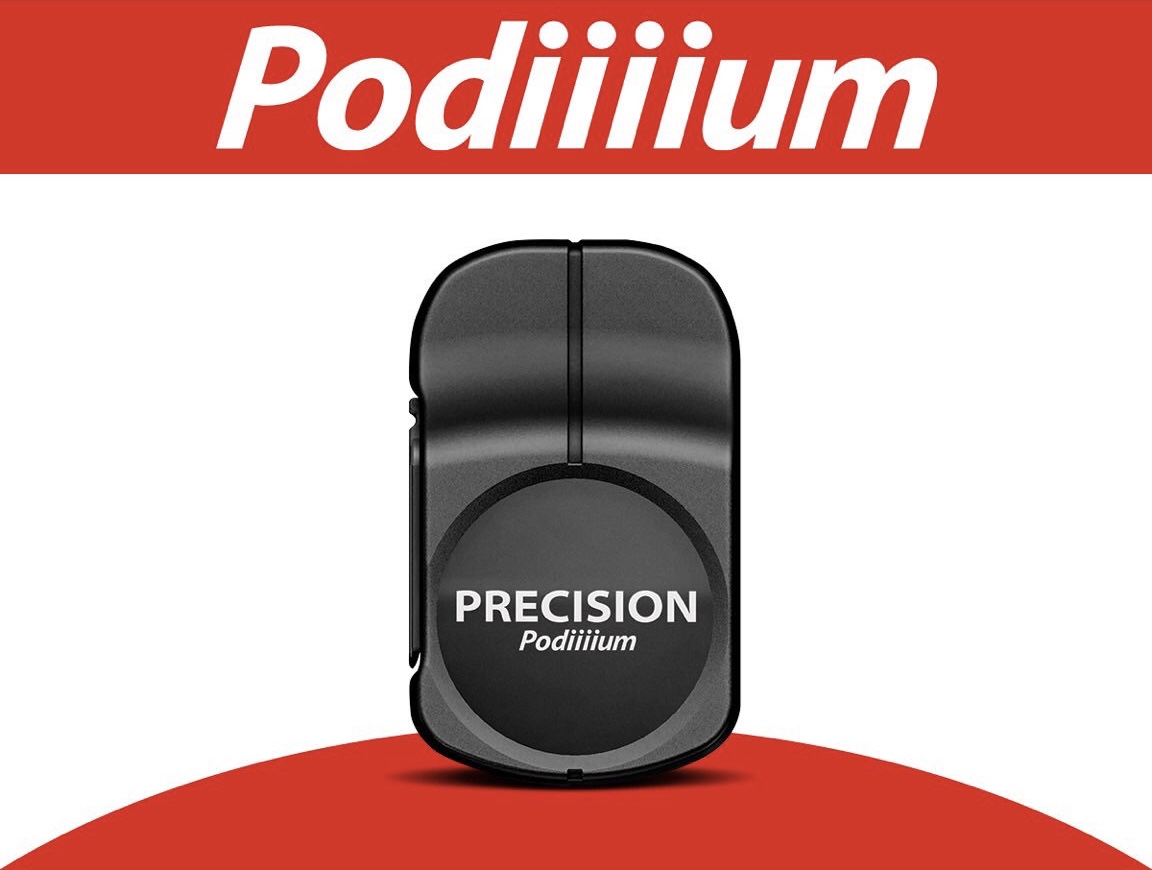 The “Ayes” had it during this week’s annual Interbike Show, as 4iiii unveiled its new PRECISION Poduiiiim power meter.

Indeed, the Canada-based brand showed-off its new power meter, which features both a slimmed down version of the left-side pod, along with a new hidden design for the drive-side crankarm.

In addition, 4iiii dispenses with a coin-cell battery design for the PRECISION Podiiiium, and instead uses a micro USB cable for charging. Moreover, the new meter has both ANT+ and Bluetooth capabilities, making it compatible with virtually any cycling computer or smartphone, with a battery life of up to 60 hours.

There are also new LED indicator lights, which flash green for pairing, and red when the battery needs to be recharged.

According to 4iiii, the PRECISION Podiiiium is available in two versions, “factory installed” which means owners send the company their crankset to have the power meter installed, or their “ride ready” that comes pre-installed on Shimano’s Ultegra crankset for $999.

However, starting next year, 4iiii says the PRECISION Podiiiium will be available with Shimano’s Dura-Ace 9100 crankset, with models for Cannondale and Campagnolo to follow.

4iiii Innovations is again shaking up the increasingly competitive powermeter market with the launch of PRECISION Podiiiium; a rechargeable, low profile crank-based powermeter designed to be compatible with a wide range of cranksets.PRECISION Podiiiium is a major step forward based on the same patent pending PRECISION 3-D strain gauge technology that powers pro cycling teams Quick-Step Floors and BORA-hansgrohe to dominance on the UCI World Tour.

PRECISION Podiiiium is designed to support a full suite of dual compatibility not presently available from any other manufacturer. The PRECISION dual configuration is unique in it’s ability to switch to a single-side powermeter on the fly, providing an inherent backup system.

Cyclists will be able to enjoy PRECISION Podiiiium Ride Ready dual options starting with Shimano FC-R9100 and FC-R8000. Extensive Factory Install crank compatibility offers the choice of single or dual-side for these models and FC-R6800. Additional models are scheduled to be released in the new year. PRECISION Podiiiium carries forward the well-known PRECISION quality for durable, lightweight and waterproof design that delivers extreme accuracy in all temperatures.

An attractive price point puts PRECISION Podiiiium well within reach of those with dual-side aspirations and a single-side budget.

• Factory Install options for Non-Drive Side start at $399, and Dual Factory Installs are priced starting at $749.
• Ride Ready Dual Options start at $999 including crankset.
• For a limited time, eligible FC-R6800 4iiii customers have the option to upgrade their current single-side PRECISION to PRECISION Podiiiium  Dual for only $349.

PRECISION Podiiiium will be officially launched on September 20-22 at Interbike 2017 in Las Vegas with market availability to be announced Q1 2018.