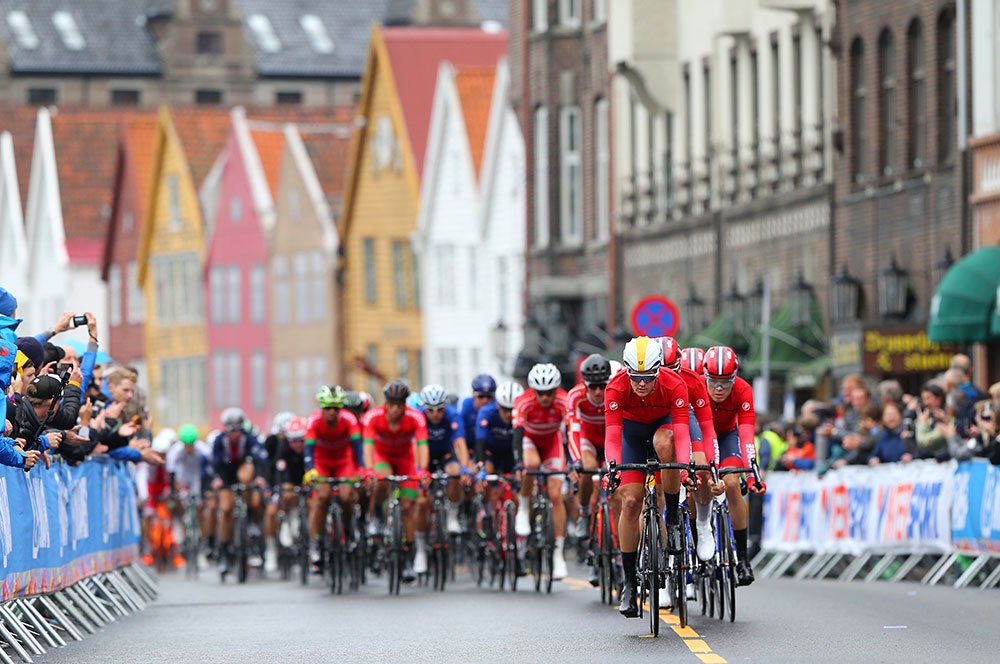 Cosnefroy had taken great risks on a tricky descent in wet conditions to catch lone escapee Kamna inside the final 10 kilometers and the two had just enough to hold of a charging, but depleted peloton to contest a two man sprint.

Hindley was quickly dropped from the lead group, while six riders managed to bridge their way across to the escapees some 40 kilometers later.

With 100 kilometers to go, the leaders had built up an advantage of around 2:30 over the bunch, led predominantly by the home team of Norway.

As the race progressed, there was some fluidity to the break with riders being dropped and other riders bridging over, helped by the launchpad of Salmon Hill.

With 50 kilometers to go, Hindley was back in a six-rider lead group, but with only around a minute on the peloton.

Into the penultimate lap and with 38 kilometers to go, the leaders’ gap was down to 24 seconds. Britain’s Scott Davies tried his luck on Salmon Hill from the break, attacking and causing Hindley to be dropped once more.

Back in the peloton, there were numerous attacks, which continued to disintegrate along the tiresome course and relentless climbing.

The race was all back together toward the top of the climb, with Davies somehow finding the energy to lead the pace on the descent.

From there a series of fruitless attacks out of the peloton occurred, but defending U23 champion Kristoffer Halvorsen found the pace too much, and was dropped.

Into the crucial final lap and it was Lennard Kämna (Germany) who put in a move on final climb to create a gap, sweeping down the final descent of Salmon Hill. The Team Sunweb pro gained 21 seconds on the peloton with 10km to go.

Cosnefroy succeeded in bridging his way to Kämna during the final 5 kilometers, setting up what would be the race-winning move.

Winding their way through the streets of Bergen, the peloton was rapidly gaining on the two leaders – but they left it too late to make the junction, and Kämna and Cosnefroy engaged in their final sprint to settle the new owner of the under-23 rainbow jersey.