8 Facts of Cycling Nutrition You May Not Know 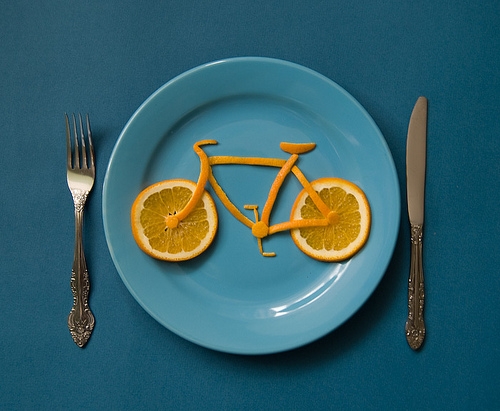 8 facts of cycling nutrition that you may not know

According to the 2012 study ‘Bananas as an Energy Source‘ by Appalachian State University’s Human Performance Lab, the fruit (BAN) was more effective than 6% carbohydrate drinks (CHO) in providing cyclists (who had just completed a 75km distance) with antioxidants, a greater nutritional boost including fiber, potassium, Vitamin B6 and ‘higher dopamine’. For BAN and CHO shifts in serum metabolites were similar to carbohydrate-fed athletes, indicating levels of increased liver glutathione production and fuel substrate, and both were comparable in terms of blood glucose, inflammation, oxidative stress and innate immune measures.

2. Fatty acids from fish are anti-inflammatory

“Omega-6 and omega-3 polyunsaturated fatty acids are precursors of potent lipid mediators, termed eicosaniods, which play an important role in the regulation of inflammation” – 2010 Nutrition reviews Research published in the FASEB Journal (2010) described how inflammation aids the healing of damaged muscle tissue through the presence of macrophages. These cells produced a high level of insulin-like growth factor-1 (IGF-1) which aids the rate of muscle regeneration, and so a high level of ibuprofen, cortisone injections or other nonsteriodal anti-inflammatory drugs may in fact slow healing. This makes anti-inflammatory foods, such as fish, particularly valuable to cyclists on the mend.

4. Consume a pre-training drink containing 200mg of caffeine but free of carbohydrates and synthetic anti-oxidants

In addition to decreasing the perceived intensity of training, caffeine increased the release of calcium in working muscles and allows for the greater activation of PGC-1alpha. Research has shown that PGC-1alpha, together with its binding partner estrogen related receptor alpha, mediates exercise-induced angiogenesis (physiological process through which new blood vessels form from pre-existing vessels). The protein has been suggested as a ‘master regulator’ of endurance training adaptation and is involved in the adaptive increase in skeletal muscle mitochondrial content (Little & Cochran 2011) and muscle fiber-type programming (Rasbach et al 2010).

The enzymes that increase transcription of PGC-1alpha are regulated by oxygen free radicals, duration of exercise, ATP and glycogen depletion, and the rate of lactate production. By having a pre-training drink free of synthetic antioxidants you are improving PGC-1alpha transcription through USF-1 and promoting more mitochondrial biogenesis. Finally the lack of carbohydrates maximizes AMPK, p38 activity and epinephrine during training.

I remember recalling how deca-ironmen promotedtraining in a glycogen-depleted state (i.e. in a fasted state such as in the morning before breakfast) to improve performance. The scientific reason for this is that it promotes high SIRT1 activity which activates a dependent pathway for the deacetylation of the infamous transcriptional regulators PGC-1alpha and FOXO1 (Canto et al 2010). Although performance will decrease (in the immediate session) and perceived effort will heighten, an athlete can mitigate this through caffeine and carbohydrate mouth rinses (activation of oral receptors and consequently brain areas involved in reward are the suggested as the possible reason for a physiological mechanism responsible for the improved performance after mouth rinses (Silva et al 2013).

6. High-fat feeding for 10 days prior to Carb-loading

Lambert et al 2001 found that high-fat feeding for 10 days prior to carbohydrate loading was associated with an increased reliance on fat, a decreased reliance on muscle glycogen and improved cycling time-trial performance after prolonged exercise. It is important to note that during the study the dietary treatments didn’t alter a rider’s weight, body fat or lipid profile.

However this result has been argued by a 2002 review – Long-term fat diet adaptation effects on performance, training capacity and fat utilization – which suggested that training intensity may be compromised in riders consuming a fat-rich diet as it decreases the storage of glycogen in both the muscle and liver. As cyclingtips stated in their article – High-fat, low-carb diets: good for you and your cycling? –

“until somone completes well controlled studies of low carb diets, over longer periods of time and with a variety of performance measures (i.e. long, evenly-paced time trials as well as high intensity sprint or hill climb efforts following a prolonged ride) no-one can say for sure whether “fat adaptation” is the next evolution in endurance sports nutrition”

It may be the case that “The effects of a ketogenic diet on exercise metabolism (and physical performance of off-road cyclists)” that long-term, high fat diets may be favourabe for aerobic endurance athletes doing high volume training but detrimental in our ability to perform high intensity work which is dependent on high glycogen muscle stores.

Furthermore, as cyclingweekly wrote last year, a 2013 study in the International Journal of Sport Nutrition and Exercise Metabolism showed a marked improvement in average power output with beta-alanine consumption (6.8 watts per rep v 4.3 watts per rep with the placebo) using an isokinetic machine.

8. Antibiotics can cause tendinitis

In 2008 the United States Food and Drug Administration (FDA) placed a ‘black-box warning’ on fluoroquinolone antibiotics (including Ciprofloxacin, levofloxacin and moxifloxacin) as people taking them had an increased risk of tendinitis and tendon rupture. In fact an Australian WHO survey into tendon disorders associated with FQ use found that ciprofloxacin was found to be a casual agent in 90 percent of cases.  Interestingly clinical manifestation reports showed that the Achilles tendon was the most commonly affected tendinopathy (89.9% of cases) but it is important to note that a 2010 review found that age was one of the correlation into a greater risk of FQ-induced tendiopathy (patients greater than 60 years of age who were recently treated with a FQ for 1 to 30 days were at a 1.5-fold and a 2.7-fold risk).