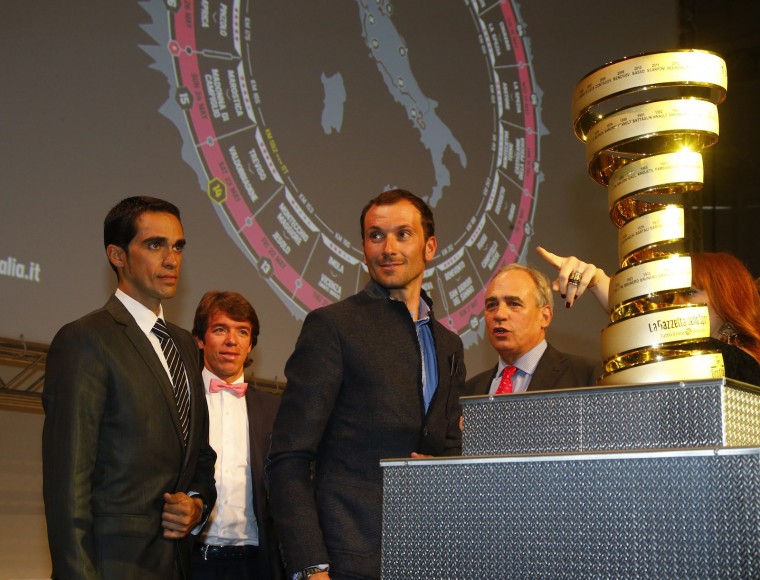 The route for the 2015 Giro d’Italia was revealed on Monday in Milan. And, Alberto Contador has already announced that he intends to ride the Italian Grand Tour and attended the presentation to witness first-hand what was in store.

“Although it would have been better to stay at home, resting on the sofa because of my knee injury, it was important for me to be here, attending the presentation. It’s a race that motivates me a lot,” stated Tinkoff-Saxo’s Contador.

The organizers presented a route that featured less uphill finishes than the last couple of years, but the Spanish rider announced that he was satisfied with the parcours featuring six stages in high mountains.

“I like the route. It’s a different Giro than those I have raced before. The seven top finishes, six of them in the high mountains, will mark the race and decide the outcome. There aren’t that many climbs and they’re without the steepest ramps. But we will face difficult climbs, among them Mortirolo. It’s less extreme but the Giro is always hard because of the changing weather,” explained Contador.

After the official presentation, Contador couldn’t say whether the parcours suited him in particular. Instead, he pointed out that the riders would have to grasp the opportunities that arise during the race.

“It’s the riders that have to adapt to the parcours. If I could choose, I wouldn’t have added a time-trial like this, but I cannot do anything else than to prepare to the fullest and do my best.”

Finally, Contador said that he looked forward to returning to the Giro for the first time since 2011.

“The affection of the Italian public is what motivates me. They’ve been asking me to return to their race since 2011. It will also be one of the great challenges of my career, as I’ll have to prepare for doing the Giro-Tour double from the very beginning of the season. I know it will be really hard, but I want to try,” concluded  Contador.