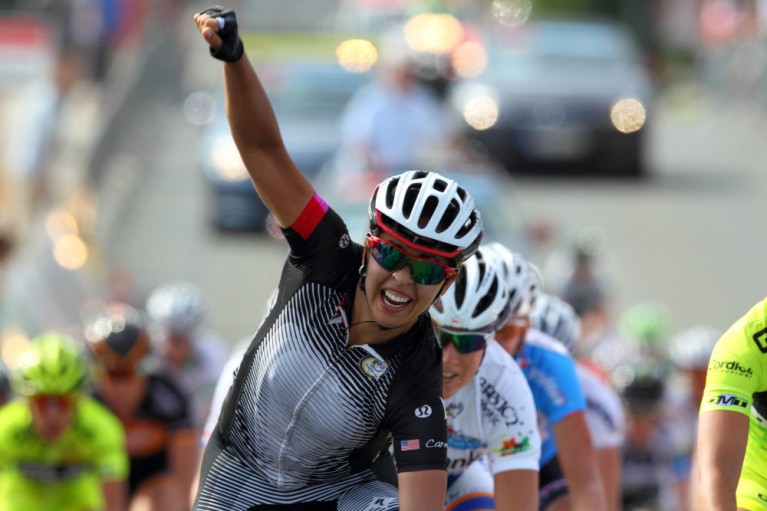 Carmen Small powered to the front in the final meters to claim the women’s one-hour criterium in the 2014 Amgen Tour of California in downtown Sacramento yesterday.

The Specialized-lululemon rider, edged out Coryn Rivera (United Healthcare), who won the race in back in 2010, while Briana Walle (Optum) finished in third.

As the race was coming down to a sprint finish, Rivera moved to the center of the course – making her move early in the sprint. But, Small counter with a perfectly timed lead out of her own to seize the victory.

“The first half of the race was pretty animated,” Small said. “I felt the wind throughout the start/finish area, and it’s a long sprint, so you had to keep that in mind.”

“That lap is long, so you had to be patient,” River said. “There were a lot of people fighting for my teammates’ wheels, so I was surfing off of other people’s wheels, trying not to use up too much energy. I was a little too far back coming out of the final turn.”

Yesterday’s race saw several riders attempt solo attacks throughout the day. However, none were successful in escaping the clutches of the peloton.

In addition, there were several early crashes in the race as well, to include numerous riders who were "fielded" by race officials, after they fell off of yesterday’s fast moving pace.