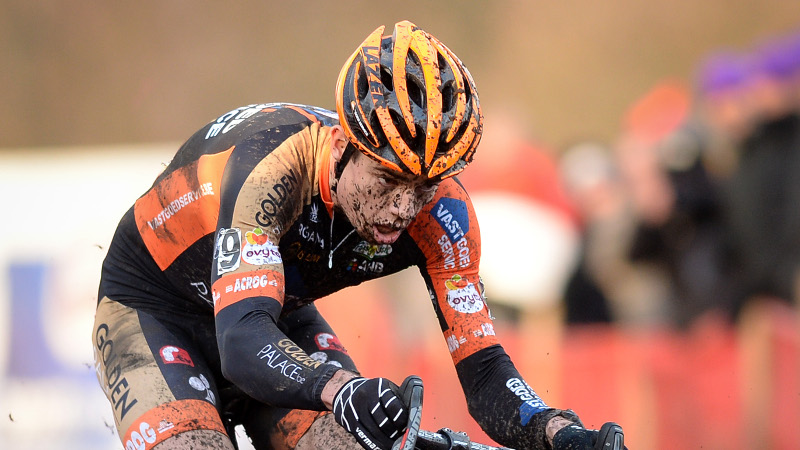 Van Aert and Van der Poel proceeded to ride clear of the field during the second lap of today’s race. And, from there, the two young riders continued to extend their lead over the chase.

However, two laps later, Van der Poel managed to get stuck in a corner, which allowed Van Aert to open up a slight gap.

From there, Van Aert continued to increase the gap, while Van der Poel struggled to regain his ground.

Unable to close the gap, a mud-clad Van Aert rode to his fourth victory in the fifth race of the series, while Van der Poel finished in second.

“The victory and an improved classification, it was a fantastic day,” Van Aert told the Belgian media, Sporza.

“It’s a big gap and that should not go wrong. Baal will still be a tough race, a sufferfest. Hopefully I can round things up in my hometown Lille,” Van Aert said. “The cold only affected my feet. The rest of the body was warm enough on a course like this.”

“I had a really good ride,” Nash said. “It was a big day in the mud, you never knew what was going to happen in each corner. I’m really happy about how things worked out.”

Vos congratulated Nash on her victory, and made no excuses for her second place finish.

“I tried my best, but it was really hard circumstances,” Vos said. “I’m not the most powerful rider, and I had to let go Katerina in the second lap. Already in the first lap I couldn’t quite match her. In the third lap I saw I was closing in, so I tried by best, I gave it all, but she had an extra gear and powered away again.”

“I like cyclocross but not in this conditions! Too muddy for me. Not bad legs but no motivation! It’s why I DNF today,” she post on Twitter.

Ellen Van Loy (Telenet Fidea) rounded out the podium in third place – at 50 seconds back.

“I’m really, really happy. Marianne and Katerina are totally the world’s best, so to be behind them, it’s not a shame for me,” Van Loy said.