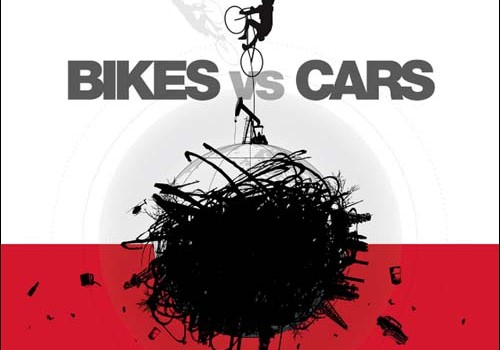 Do you want change too?

We want everyone to join the ride!
So here are some ideas on what YOU can do:

Cars run on money and make you fat. Bikes run on fat and save you money. Don’t like the gym? Tired of looking out through the windshield? Exercise on your way to work by getting there by bike and feel the wind through your hair.

25 per cent of all car trips in the US are less than one mile (1,5 km). Cancel some of those, or even better, all of them. You will be part of a global movement that will create change.

Running late to an important meeting, stressed and locked-up in a car? By bike you can often find shortcuts when traffic is massive. Endorphins that makes us happy are produced by exercising, so you can look forward to arriving to work on time with a clearer mind.

Do you want to help us attract more people to the bicycle movement?
This is what you can do:

First, you can sign up to our newsletter. In the form, tell us in which city and country you live in so that we can show the world that WE ARE MANY in many different places.

The bicycle, an amazing tool for change. People all over the world are moving towards a new system. Will the economic power allow it?

Bikes vs Cars is not only a film, we are a part of a global movement. This feature-length documentary, a work-in-progress aiming for 2014 release, is meant to be used an engine for all of us that think change is needed and possible. The film will investigate the politics that keep the car model thriving. Here’s a peak into the synopsis:

There’s an ongoing war: bikes vs cars. A multi-billion dollar industry that from early days has done everything to make society car dependent. Hundreds of billions of dollars are invested every year to sell the dream of car freedom. Now, oil prices and traffic gridlock have opened up room for bicycle revenge. Creative initiatives pop up, politicians and activists take on the mighty car. The car lobbyists have an enormous impact on city planning, in history and today. Do politicians dare to challenge the lobbyists?

The film will follow individuals around the world that are fighting to create change. We also meet a car commercial director, oil lobbyists and politicians afraid to lose the car owner’s vote.

A note from director Fredrik Gertten

"I was born in Malmö, Sweden, a city where the bike is the natural choice for going from one place to another. I’ve traveled the world wondering why there is so little space for bikes, why it’s so dangerous when it’s so much more fun to explore a city by bike.  The car model as we know it has reached an extreme level with constant gridlock and millions of productive hours lost. The frustration is growing and cities need to look into new models.

The urban biking movement is growing. Beginning just for the passion, the freedom on the bike, it has evolved into a political movement asking for better city-planning, safe and separate bike lanes. We also suffer from the the anxiety of climate change, but we are at least doing something about it. In Copenhagen and Amsterdam forty percent commute within the city on bikes. Try to adopt that number to other huge cities in the world and you have an existing utopia.

(In Copenhagen, 40 percent commute on bike every day. Imagine the climate effect if other cities reached the same numbers)

What would happen to car sales and oil usage if other cities followed that example? It would be revolutionary. And here’s the conflict. The car industry is at the center of our economic system. They have money and investments to lose. For the car owners and commuters that have become so invested in their lifestyle, a change is painful. It’s a conflict that interests me. That’s why I’ve decided to take on this project. A project of passion.

I am proud to be part of a growing global movement. I hope that everyone that takes part in this campaign will feel the the same and happily jump on their bikes, spread the word and donate."

We would love to become the Kickstarter documentary campaign with the most backers. Maybe not the largest amount of money, but in number of people. Because we believe that we are many that want a change. So help us show that WE ARE MANY. Even a small amount is a statement. Just click on the green “back this project” button to the right and next year we’ll have a great film to show you!

The 50 000 USD we are asking for is needed for the post-production and outreach of the film and it’s message. The post-production stage is when we finally get to put all of the footage we’ve collected together. Edit it, add music to it, add subtitles. These things all take a lot of time and money, but are essential for presenting you with a strong, effective documentary. Once we’re finished, we want to get it out to as wide of an audience as possible, which requires a lot of reaching out! Not only on Twitter, Facebook and Instagram, but also to film festivals, distribution companies, tv channels etc. This documentary is addressing a very global issue, so we want people around the world to get a chance to see it!

We also have exciting plans for bikes-vs-cars.com where we are working on more interactive content, like an app for measuring the change you make by going by bike, which will visualize how we together make a big difference. With more money and a larger community, we can be more ambitious in engaging with the audience and creating buzz around the issue. Playing a small part in changing the world.

We offer a lot of fine perks and even the possibility to be one! If you want to be a bike guide in your city and become one of our most valuable rewards you should fill in this form: http://www.bikes-vs-cars.com/bike_tour_questionnaire For you whom are interested to get this perk we have bike guides in Norrköping, Stockholm, Malmö and Västerås in Sweden, Daix in France, Los Angeles, San Francisco, Chattanooga in USA, Toronto and Vancover in Canada, Sao Paulo, Rio and Brasilia in Brazil, Lisbon in Portugal, Bogota in Colombia, Copenhagen in Denmark and Arezzo in Italy, Dubai and Mexico City. More cities to be announced.

The artist Rebeca Mendez has done the artwork for BIKES vs CARS. We have 30 exclusive screen prints, signed by the artist, for our 350 USD reward.

Our 750 USD reward contains an invisible bicycle helmet. Fredrik Gertten did a short doc about the inventors of the helmet called Hövding. Take a look at it here:

For 30 USD you will get the films DOLE Food Co don’t want you to see. As you might know, Fredrik and WG film got sued for BANANAS!* and then he did a story about free speech, Big Boys Gone Bananas!"

WG Film is a production company based in Malmö, Sweden, famous for strong humanitarian stories that have travelled around the world since 1994. Films like: Love Always, Carolyn – The Socialist The Architect and the Twisted Tower – Blådårar, copros:Final Image and Oscar nominated Burma VJ. ALL FILMS