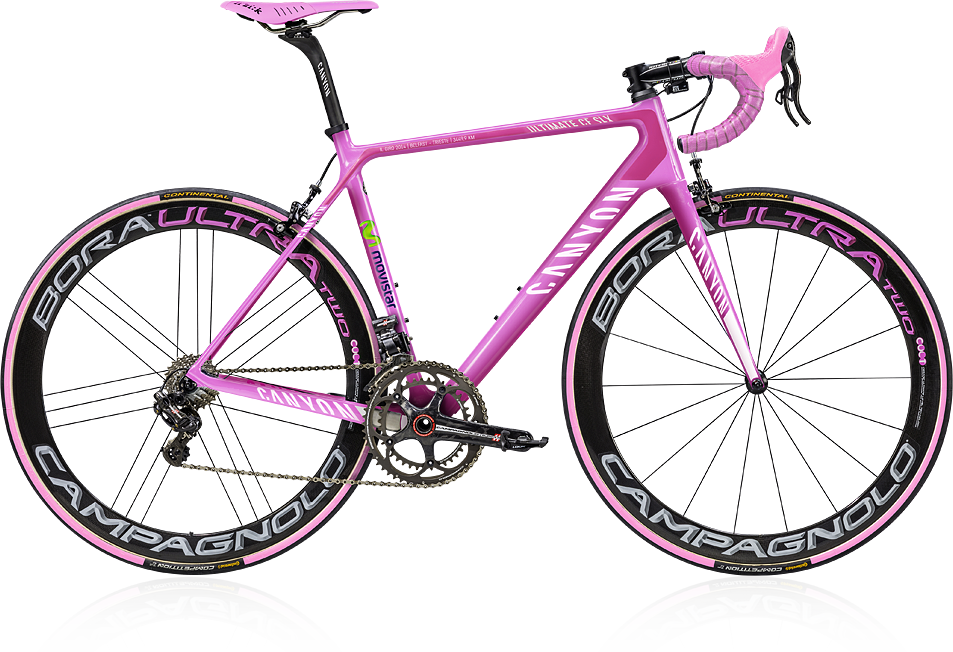 If you want one, it’s best to get in line now, as only 21 bikes – symbolizing the 21 stages of the Giro – will be produced !

The Giro d’Italia can turn riders into legends. Anyone with the coveted Maglia Rosa on their shoulders at the end of three weeks of racing secures their place in cycling history. The 97th edition of the Corsa Rosa was a particularly unforgettable race for several reasons. It marked a major career milestone for Movistar Team’s 24 year-old captain, Nairo Quintana, who became the first Columbian to win the race and whose victory also confirmed the biggest sporting success in the history of Canyon Bicycles.

In homage to this landmark achievement, to the mythology of Giro and to the heroes that compete in it, we have produced a very special edition of the Ultimate CF SLX, identical in every way to the machine Quintana rode to victory at the Giro and available in extremely limited numbers. The Ultimate CF SLX sets new benchmarks in terms of combining breath-taking lightness, absolute stiffness and unprecedented levels of comfort.

Equipped exclusively with the finest components available, the Ultimate CF SLX IL GIRO 2014 weighs in at an incredible 6.15 KG. With just 21 examples to ever be produced, each bike serves as a tribute to one of the 21 stages of this legendary race.

Guarantee extra performance on the limit with powerful, easy to modulate braking.

Carbon and titanium derailleur for the quickest, lightest and most accurate electronic shifting performance.