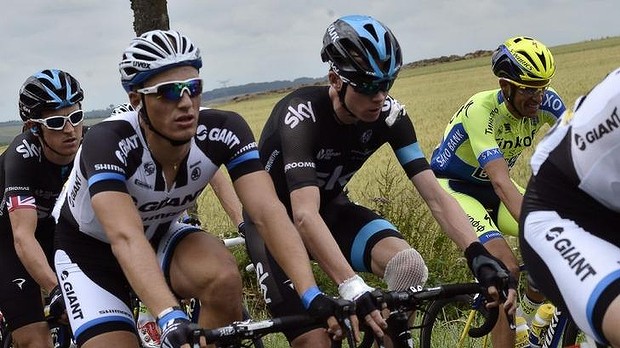 Defending champion Chris Froome has abandoned the Tour de France today, after crashing twice towards the start of today’s rain soaked stage 5 from Ypres to Arenberg.

Riders were anticipating difficulties with today’s "cobbled" stage, ironically however, the peloton had not even reached the fearsome sections by the time an injured Froome abandoned the race and hobbled into his team car – holding his wrist in pain.

The British rider had taken an early fall in the stage, which required him to change bikes quickly, and try to rejoin the peloton.

Not long after, Froome took yet another spill, where he was seen standing by the road side – clutching the same wrist that he had previously injured.

It was reported on Tuesday, that Froome had crashed – causing injury to the wrist in question. However, he received clearance later that evening to resume racing.

"Chris is a fighter, he’s not someone who gives up just like that."

However, today’s incident(s), marked the third and final blow to Froome’s wrist, which left him unable to continue racing.

Following his decision to abandon the Tour, Froome "tweeted" the following remarks.

"Devastated to have to withdraw from this years TDF". "Injured wrist and tough conditions made controlling my bike near to impossible.

"Thanks to the team & support staff for trying to get me through today. Wishing Richie Porte and Team Sky the best for the rest of Tour!"

In light of today’s news, there will likely to be considerable focus on Brailsford’s contentious decision to exclude Bradley Wiggins from this year’s Tour.

Whether or not Wiggins would have been able to challenge the likes of Alberto Contador (Tinkoff-Saxo) and other race favorites for the overall victory, will remain a topic of vigorous debate for some time to come.