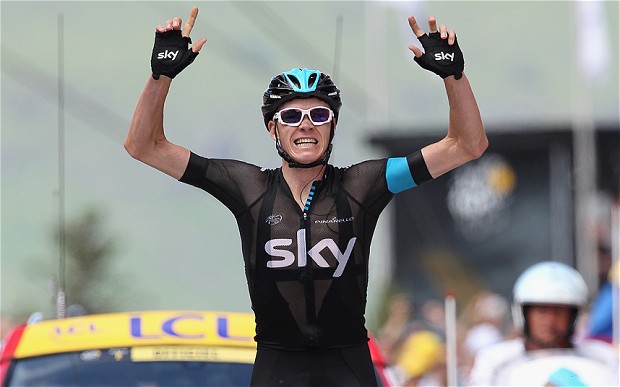 This year’s Tour de France winner, Chris Froome, says he backs new UCI president Brian Cookson to rid the sport of its doping culture and usher in a new area.

Froome had to field a number of questions and suspicions related to his performances during his masterful victory at the Grand Boucle in July as some equated his dominant displays in the mountains to the use of illegal substances.

And while Froome says he can understand it to a certain degree, he hopes the appointment of Cookson to replace his tainted predecessors at the UCI helm will help the sport recover from its tarnished image.

"It really is important for us and hopefully that’s something a new president in the UCI can help us to achieve, which is move past that old image and the baggage from the past and show people that the sport really has turned around since those darkest days," the 28-year-old Team Sky leader said from the Criterium de Saitama on Friday.

"It is frustrating but I have got perspective on it and can see it from the fans’ point of view and the media’s point of view. I too used to follow those races and support those riders, so I can understand where the anger and frustrations are coming from, and it’s up to us now to show that we’ve moved on."

The confirmation back in January from Lance Armstrong that he doped throughout all seven of his Tour victories, of which he has since been stripped, dealt a stunning blow to cycling’s credibility but was also a watershed moment for the sport.

Further revelations about a number of names that had been caught taking the banned blood-booster EPO on the Tour in 1998 and 1999, in retroactively tested samples, following this year’s Tour further fuelled the speculation that doping was more the rule than the exception throughout the late 1990s and early 2000s.

For Froome, though, it wasn’t just doping questions that dogged him this year, he also had to spend months answering questions about his relationship with his predecessor as Tour winner, Bradley Wiggins.

The first six months of this year were dominated by speculation over who would be Sky’s leader at the Tour, until Wiggins eventually pulled out through illness and injury and failed to defend his title.

But now Froome believes the press have got bored with that story and moved on to other things, particularly given Wiggins said earlier this year that he may never ride the Tour again and will return to the track in 2015.

"It’s something (their rivalry) the media keep trying to build up to create more of a story, but it’s non-existent," said Froome.

"If I’m not going well in January, they’ll support someone else. Maybe Richie Porte will be the team leader, so you can’t say this guy is team leader, it’s not how cycling works."

Froome’s season is set to come to an end with Saturday’s Criterium, which will see some of the stars of the Tour de France come up against Japan’s best riders in a series of races around a street circuit in the Japanese city north of Tokyo.

But the Kenyan-born Brit hasn’t ruled out making another trip to Japan for the 2020 Olympics.

"That’s a long way in advance but seven years, I’m currently 28 so there’s no reason why I shouldn’t be competing at a good level at the age of 35," he said.

"If you look at Chris Horner, if he’s anything to go by just winning the Vuelta a Espana at 42, then I should still have a few years ahead of me.

"For me a race like the Olympics would always be a bit more of a gamble, it’s a one off event, a one off hit out.

"I don’t know if I’ll ever be able to medal again at an Olympic Games but certainly I’d like to give it a try."