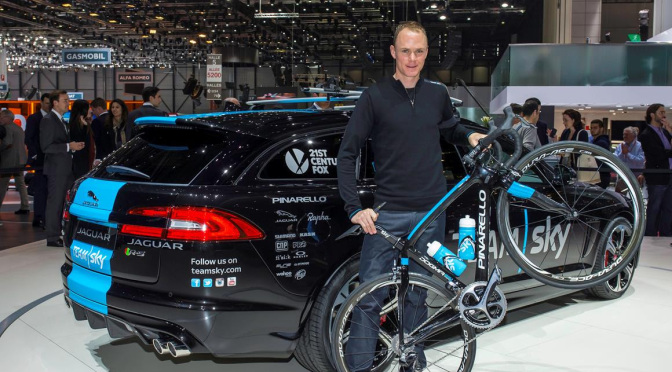 Defending Tour de France champion Chris Froome joined Jaguar to celebrate the official naming of its highly-anticipated mid-sized premium sedan, the Jaguar XE and the introduction of the new XFR-S Sportbrake at the Geneva Motor Show.

The Team Sky rider was the star of the Jaguar stand at the Geneva Motor Show today for the introduction of the new Jaguar XFR-S Sportbrake and the company’s official announcement that its new premium sports sedan will be named Jaguar XE.

Froome was driven onto the stage in the XFR-S Sportbrake, Jaguar’s first ever high-performance, R-S badged production estate car.

Froome confirmed that Jaguar has already advanced its association as an ‘Innovation Partner’ with Team Sky through the integration of design and engineering resources to further enhance the team’s performance.

Jaguar, which has provided technical support vehicles to Team Sky since 2010 – including several XF Sportbrake models during the famous 2012 Tour de France win by Sir Bradley Wiggins – recently announced its new sponsorship agreement for 2014 and 2015. Jaguar is the team’s official Innovation Partner, and the Jaguar logo now features on the race jerseys.