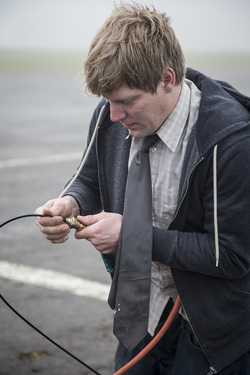 So before i get into attaching some sort of throttle and finding a place for the gas bottle i thought it best to give it a test to see if its got the power to push me because it looked all beast like raging away in the back of the van but we have no idea if that translates to much thrust. So with someone holding the gas bottle and someone else controlling the throttle it was time to feel it. Well it worked alright and like most jet engines that are small pulling away is not super quick but tit soon picked up pace once going and was a strange feeling. With my mate holding the bottle we could only mange a crapy running pace and norah wants to stretch her legs so we chucked to bottle in the van for test 2. This had disaster written all over it as the driver cannot see me for simon was in passenger seat taking pictures, no one can hear each other because of the intense noise and i’m not controlling the throttle but we didn’t care we had a bike to test. 30mph was the result but there is more speed still to come and we would have had another test if wasn’t for the airfield saying its to loud and no more
but the story doesn’t end here as its time to give it its own fuel and throttle and an open road………….