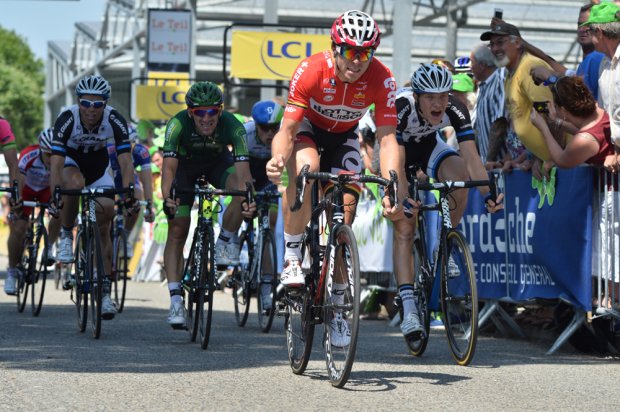 The contingent of German top sprinters from Giant-Shimano is no longer limited to the fame of Marcel Kittel and John Degenkolb as Nikias Arndt, 22, claimed his first victory at World Tour level as he outsprinted Belgium’s Kris Boeckmans of Lotto-Belisol and ruined the hopes of Arnaud Démare in a tight finale in Le Teil. Already a stage winner at the inaugural Arctic Race of Norway in Stokmarknes, Arndt stepped up on the occasion of a long and hot day of racing at the end of which Chris Froome kept the lead in the Dauphiné without any trouble.

Berhane ahead in defense of Reza’s polka dot jersey

It wasn’t just a day of calculation for the sprinters but firstly for the first contenders of the polka dot jersey. With Kevin Reza having in mind to pursue the legend of his road captains Thomas Voeckler and Pierre Rolland who have shone in these colors at the Tour de France, Europcar sent Natnael Berhane in the early breakaway with Cesare Benedtti (NetApp-Endura) and Blel Kadri (AG2R-La Mondiale). It was an opportunity for the Eritrean to make it up for his disappointment of stage 2 as he fell sick and couldn’t follow the rhythm in the col du Béal, but his presence at the front was firstly motivated by the defense of Reza’s lead in the King of the Mountains competition. Berhane passed first at the top of côte de Lavet at km 28.5 after one hour of racing against a disadvantageous wind that was going to make the race slow for a while. Reza consolidated his lead by taking the fourth place.

Nizzolo out of contention after crashing

The time gap went up and down, as Team Sky maintained it around four minutes and FDJ.fr took over when it reached 7.30 at km 57. Trek Factory Racing also put Markel Irizar in the chase until their sprinter Giacomo Nizzolo was forced to pull out – so did Jérôme Coppel of Cofidis – after being involved in a crash at km 129. Another sprinter disappeared from the favourites’ list as Thor Hushovd (BMC) was one of the first riders dropped at the bottom of the second climb of the day, the col de la Mûre, where Arnaud Démare wasn’t put in difficulty, so FDJ.fr went on to chase the leading trio once the race reached the Rhône valley under scorching conditions.

A thrilling finale before the sprint

All eyes on Démare, the final word to Arndt

The tricky finale promoted a young gun from Giant-Shimano who has more sprinters in store than just Marcel Kittel and John Degenkolb. In a tight finish, Nikias Arndt, also a German, outsprinted Kris Boeckmans from Lotto-Belisol. The success of the Dutch team was complete with Reinhardt Janse van Rensburg passing Yannick Martinez (Europcar) in extremis in a disappointing outcome for French sprinters.