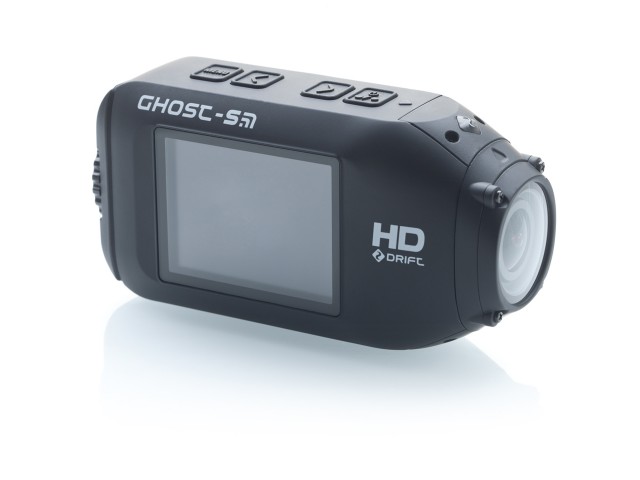 
The Ghost-S is waterproof to 9 feet (~3m) as is- and to nearly 200′ with the optional “Northern Winter” case.  The upgraded seven-element aspherical lens can zoom up to 10x and can be rotated 300º to account for all sorts of odd placements.  Pros (or groups of similarly-equipped mates) will appreciate the ability to synchronise up to five cameras via WiFi.

Facilitating action self-portraits and photo taking for online product reviews, the burst mode (triggered by the remote) will take blasts of up-to-12mp still photos.  Ideal for winter’s short days and long shadows, low light performance is said to be substantially improved.  Come the end of the year, integration with the iOS and Android Drift Mobile App will even allow the camera to be previewed, zoomed, triggered, and its settings tweaked via smartphone.

Drift Innovation, a sports and lifestyle company specializing in creating camera technology and accessories that enable anyone to live life outside the box, is releasing their latest and most powerful action sports camera, the Ghost S.  Available worldwide on November 26, the wearable action-packed camera boasts the longest battery life on the market and numerous industry-leading features while remaining the easiest to use. The Ghost S is now available for pre-order at driftinnovation.com.

The Drift Ghost-S comes out of the box with a 3.5 hour battery life, built-in two-inch LCD screen, waterproofing up to 9 feet (and up to 196 feet with additional case), ability to shoot 1080p@60fps, a 300-degree rotating lens, WiFi video streaming while recording, two-way remote control, mounts and more. Many of these features are sold as add-ons by most brands; the Ghost-S comes loaded with these enhancements.

"Powerful shouldn’t mean complicated. Drift continues our commitment to making POV cameras that are both easy-to-use and technologically advanced, with no sacrifice of features that professionals want but anyone can use. With the new Ghost-S, anyone can get out there and live life outside the box," said Robin Parker, co-founder, Drift Innovation.

Increased 3.5h Battery Life & Improved Video Quality
Built and expanded on the foundation of the award-winning Drift HD Ghost, the Ghost-S boasts such stunning features as an industry-best 3.5-hour battery (@30fps) plus the ability to film spectacular quality video in 1080p@60fps and 720p@120fps.

Get the Shot and See It
A built-in two-inch LCD screen (made scratch resistant by Corning® Gorilla® Glass) lets users see what they’re filming or use it for instant playback. The Ghost-S also features a 300-degree rotating lens, allowing the ability to mount the camera at any angle to capture the perfect shot. The simple interface enables users to easily set preferred shooting mode: video, photo, photoburst or timelapse.

Two Way Remote Control
Like its predecessor, the Ghost-S comes with Drift’s Two-Way Remote, placing intuitive control at the user’s fingertips by clearly communicating the camera’s function status with Drift’s color system. The remote can also control multiple Drift cameras at once.

Technologically Advanced
Ideal for professionals and casual users alike, the Ghost-S is the most robust Drift camera to date with a leading-edge processor, Sony CMOS sensor and 7-element aspherical lens technology, making the Ghost-S capable of 1080p at 60fps and 12mp stills. Whether strapped to a helmet while snowboarding or shooting a documentary, the result is extraordinarily smooth, rich video in any condition. More additions to the Ghost-S include "Clone Mode," where multiple Drift cameras can record simultaneously, and "Car DVR mode" for in-car and on-bike video security.

Combined with the free iOS and Android Drift App, Ghost-S users have ultimate control and customization. The Ghost-S retails for $399 USD and will be available at retail locations worldwide on November 26 and for pre-order now at driftinnovation.com

About Drift Innovation
Dedicated to creating technology for people who share our passion for sports, art, music, film and an active lifestyle, Drift Innovation lets creative individuals capture and share their unique journey and live life outside the box. Drift manufactures quality HD action cameras, mounts and accessories, leveraging the latest technologies and R&D. By putting professional-caliber features in an intuitive, easy-to-use design,

Drift allows anyone to immediately begin filming "out of the box."

Drift sponsored professional athletes in moto, auto, outdoor, snow, aquatic and airborne sports are an integral part of the R&D process, testing the performance and durability of Drift products in the field.

Widely recognized as one of the top action camera brands globally, Drift distributes its products in more than 35 regions.