CapoVelo.com
CapoVelo.com - - Dutch City of Groningen Boasts the Highest Percentage of Bicycles in the World
7359
post-template-default,single,single-post,postid-7359,single-format-standard,no_animation 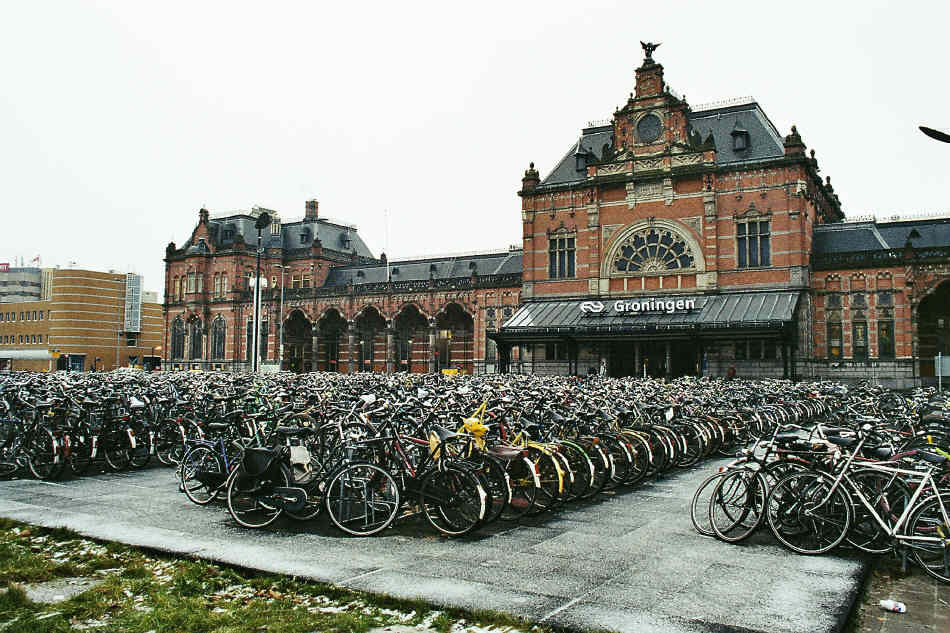 It’s no secret that just about anywhere you go in the Netherlands is an incredible place to bicycle. And in Groningen, a northern city with a population of 190,000 and a bike mode share of 50 percent, the cycling is as comfortable as in any city on Earth. The sheer number of people riding at any one time will astound you, as will the absence of automobiles in the city center, where cars seem extinct. It is remarkable just how quiet the city is. People go about their business running errands by bike, going to work by bike, and even holding hands by bike.

The story of how they got there is a mix of great transportation policy, location and chance. You’ll learn quite a bit of history in the film, but essentially Groningen decided in the 1970s to enact policies to make it easier to walk and bike, and discourage the use of cars in the city center. By pedestrianizing some streets, building cycle tracks everywhere, and creating a unique transportation circulation pattern that prohibits vehicles from cutting through the city, Groningen actually made the bicycle — in most cases — the fastest and most preferred choice of transportation.

It does feel like bicycle nirvana. When I first got off the train in Groningen, I couldn’t stop smiling at what I saw around me. In an email exchange with my friend Jonathan Maus from Bike Portland, he described it as being "like a fairy tale." This jibed with my first thought to him — that I had "entered the game Candyland, but for bikes!" In fact, for our teaser I originally titled this Streetfilm "Groningen: The Bicycle World of Your Dreams," before I talked myself out of it. Although there is a magical quality about being there, in reality there is nothing dreamy or childlike about it. With political will and planning, what they have done should and can be done everywhere.

In our Streetfilm you’ll see the 10,000 (!) bicycle parking spaces at the train station, some of the incredible infrastructure that enables cyclists to make their journeys safer and quicker, and you’ll hear from many residents we encountered who go by bike just about everywhere they travel. But as one of my interview subjects, Professor Ashworth, wanted me to point out: the three days I was there were bright and sunny, and the hardy people keep up the bicycling through the cold winters. As with many bicycling cities, there area also big problems with cycle theft, and residents are always yearning for more bicycle parking.

I think most of us would trade some of those problems for a city with 50 percent mode share (and up to 60 percent in the city center!!).