Energy Drinks, Caffeine and the FDA 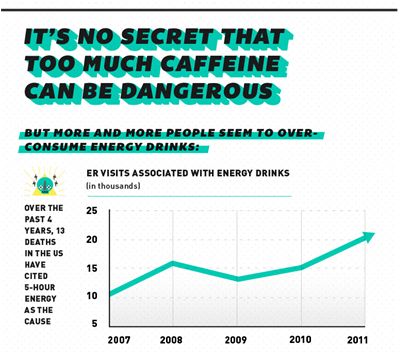 If an Energy Drink is classified as a “beverage”, its ingredients must be deemed “generally recognized as safe” (GRAS) for human consumption. In determining this, the FDA considers not only the ingredients used, but also the amounts added to the drink. For example, caffeine added to beverages is considered “safe” up to levels of roughly 70 mg per 12 ounce drink (e.g., 200 parts per million). As long as ingredients used are deemed safe (GRAS), FDA approval is not required.

If an Energy Drink is classified as a “supplement”, its ingredients do not fall under the GRAS standards. Instead, it’s up to the manufacturer to submit their own research to show the safety of ingredients. These drinks may contain unproven levels of otherwise safe additives, such as caffeine. They may also contain unproven additives – those that have not been tested by the FDA to determine safety.

The FDA can only restrict Supplements if they can demonstrate the ingredients present an unreasonable risk of illness or injury. Such review efforts may not be taken by the FDA unless they decide to act on reported incidents of adverse effects caused by the drinks. It’s interesting to note that manufacturers of supplements are required to report incidents of adverse effects to the FDA, while beverage manufacturers are not.

Awareness of the total caffeine you consume will help to keep your consumption within safe levels. Care should be taken if consuming caffeine in combination with alcohol or certain drugs, as this can be particularly dangerous. Also certain groups need to limit or restrict caffeine consumption altogether, including children, pregnant and nursing women, and persons with insomnia, attention deficit disorders, or heart conditions.

If the caffeine levels in your Energy Drink are not shown on the can, you should be able to find this information online. You can .

Late last year the FDA said it would consider whether new labeling requirements and health warnings on caffeinated energy drinks are warranted. They are also working on final rules for what qualifies as a beverage versus a dietary supplement. These efforts are taking place as investigations into deaths linked to 5-hour Energy and Monster Energy Drinks are being conducted.

It should also be noted that Monster recently announced it would begin labeling the caffeine content on its energy drinks to provide better information to its customers.

Several outlets are working to bring awareness to the dangers of misusing Energy Drinks. The folks at OnLineDegrees.org designed a, targeted to young adults and children (segment at top). Visit their site to see the full graphic.

As reports of Energy Drink hospitalizations and deaths continue, what are your thoughts – on the manufacturers, the consumers, the FDA? Please comment back.