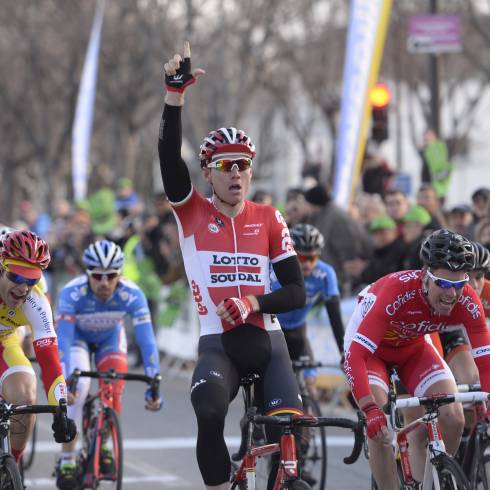 At one point, Vaubourzeix attempted to jettison his breakaway companions, but was subsequently reeled back in by the group.

After 15 kilometers of racing, the breakaway group was still holding onto a minute and a half gap over the peloton. And, a slight pause by the peloton during the first passage of the Mur de Laudun, allowed the group to extend their lead to three minutes.

In the meantime, Barbier claimed the first immediate sprint points over Meurisse and Pons, while Vaubourzeik beat Tronet and Pons in the first KOM sprint at the top of the Laudun.

From there, the breakaway group continued to hold onto a lead of around three minutes. However, as the race reached the  approached of the first lap of the finishing circuit, their advantage fell to two minutes. And, as they crossed into the final 58 kilometer mark, their lead had fallen to 1:35.

Meanwhile, the escapees remained out front, still clinging to a 35 second gap. But, as they entered into the penultimate lap, their gap was hovering at only 20 seconds.

As the race tackled the next climb, the breakaway group split up, with Vaubourzeix and Tronet going clear.

Meanwhile, the remaining escapees were reeled in by the peloton.

As the peloton briefly slowed, the two escapees managed to increase their gap to almost a minute.

As the race entered into the final lap, the escapees’s advantage was down to only 18 seconds. And. moments later they were both brought back into the fold.

From there, Voeckler tried to make a late move, but there was no escaping the clutches of the peloton. From there, Lotto Soudal and Trek Factory Racing shared in the pace setting, with Gallopin ultimately being delivered to victory.