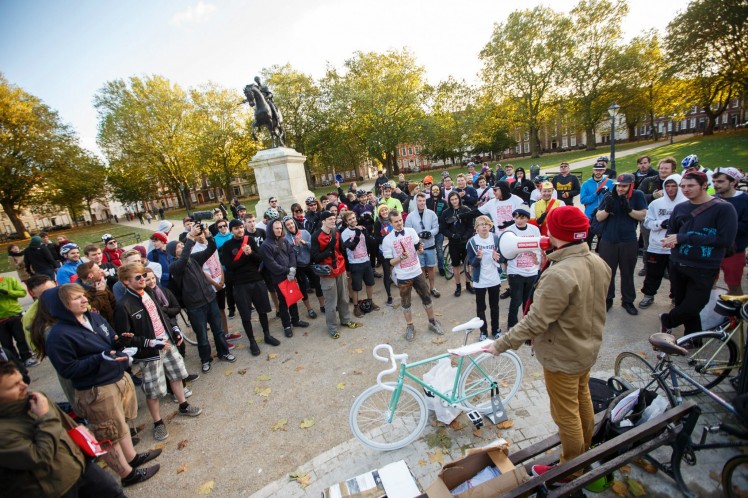 A cool video about the FIXED ‘n’ CHIPS event in London last December.

FIXED ‘n’ CHIPS was a fixed gear bike alleycat race here in Bristol, UK with each of the 5 checkpoints being a Chip Shop. The race was all based on points, so the fastest to each checkpoint would receive 10 points, the second fastest receiving 9 points and so on. However, each rider could choose to stop and order a battered sausage or pot of mushy peas and receive a special 5 points bonus points card. The risk in doing that lay in time… do you stop for a sausage or grab whatever points you can and try and get to the next checkpoint quickly for a possibly 10 points!?

The race proved really quite tactical and it turned out that the results were very surprising indeed! The checkpoints could be visited in any order, so it was up to the racers which route they took. It turned out that it simply wasn’t enough to be super fast, because Al McCarthy, who was the fastest visiting all 5 checkpoints in just 30mins actually ended up 6th because the winner, Paul Bennellick, not only visited the checkpoints as fast as he could, he then took the time to go back to each chippy and wolf down a pot of mushy peas, therefore ensuring his place as the FIXED ‘n’ CHIPS Grand Champion! So the old adage was true… points do mean prizes!

Prizes bring us to the awesome sponsors, of which there were many and plentiful. From State Bicycle Co. giving us an entire complete bicycle for the grand prize to Whiteduck Screenprint for printing all the clothing, there were so many fantastic goodies from our sponsors for the riders, so let me say a huge thank you to them for supporting the event!

Let me thank the 79 riders who turned up to take part in the fun, it was so overwhelming to see so many faces, new and old. I did not expect that many people so it meant an awful lot to me that they came to race!

Lastly, let me thank everyone who helped out with the event, there’s too many to name because so many awesome people gave me their time. In particular thank you to Jason for being my right-hand man, thank you to the checkpoint chaps Jake, Julien, Liam, Merlin & Kieran and to Jonny and his filming crew for capturing the action on film!