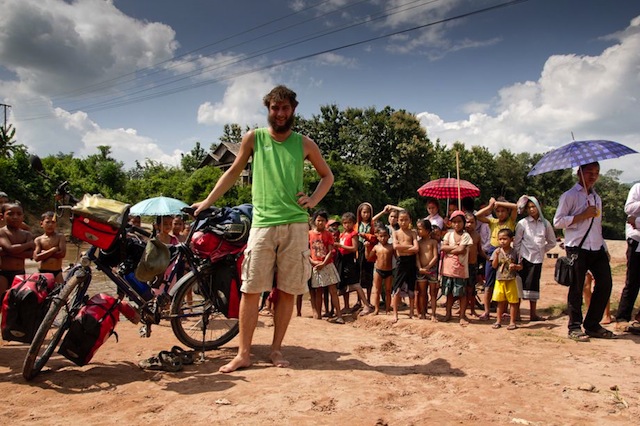 Here’s the latest installment from globe trekker and adventure cyclist Florian Schmale, as he cycles across Thailand, Laos, Cambodia and Myanmar.

"It is about living your life in a way that makes you feel Alive“.

Half a year has passed since I released my last video Around the Annapurna . Of course I´m still filming , even though my GoPro didn´t work for a while , but I was simply too lazy to sit down and make something out of all the footage.

And if I had not get this email from Karin from the U.S., it would probably still the same. Karin organizes an annual “Bicycle-Travel-Film-Festival”, where my Video The cycle bug was shown last year . She asked me to send in a video again this year, I would have time until mid-March.

That was in January , so I had a few weeks time . I started to go through my footage and sort it a little bit, but had no concrete idea . Time passed by, different ideas flitted around in my head , but only in mid- February I started to get serious about it. I worked for a few hours at evening in the tent, sometimes until late at night when I had electricity . Sometimes I worked during lunch in a restaurant.

Two days I spent at a beach in southern Thailand. While I sat during the day in the restaurant (electricity and Wifi from the expensive beach resort next door) in front of the computer , Buggi, another cyclist , swim or tried to climb coconut trees, and could only lure me away from my work in the evening with a cold beer. When it got dark we set up our tents at the beach , and packed our stuff next morning just to push the bikes for 50 meters to park in front of the small restaurant to switch on the laptop again. The final touch I did in Georgetown , Malaysia, where I holed up in the hostel (Electicity and Wifi) while Buggi explored the city.

Finally it’s done and it gives you a little preview of Myanmar, many of the scenes are from there.