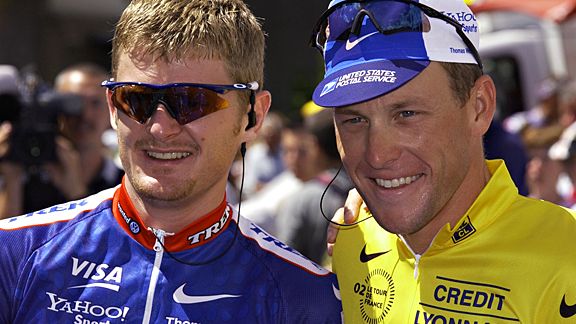 A judge is scheduled to hear arguments presented by Floyd Landis’ attorneys in their "whistleblower" suit against Lance Armstrong involving the statue of limitations in the case.

It’s called the Wartime Suspension of Limitations Act. Because the United States was at war in Afghanistan around the time of Armstrong’s alleged fraud, Landis’ attorneys are arguing that normal time limits don’t apply to Landis’ case against his former cycling teammate. Even though a case about doping in cycling has nothing to do with American military hostilities, they say the wartime act allows them to go back further in time to collect damages against Armstrong – perhaps nearly $7 million in additional damages for Landis.

"It is a highly controversial provision of the False Claims Act," said Tony Anikeeff, an attorney who specializes in similar cases for the firm Williams Mullen. "It is used by the Justice Department mostly in dealing with fraud in Afghanistan because we were at war. The theory behind it is that when you’re in the fog of war, the government cannot be spending time to root out fraud and that it needs time after the war to pick up the pieces."

It’s one of many arguments at play in a federal court hearing today in Washington D.C. The case originated in 2010, when Landis sued Armstrong for fraud, acting as a government whistleblower under the False Claims Act. The government joined his case earlier this year, alleging that the U.S. Postal Service would not have paid $40 million to sponsor Armstrong’s cycling team from 1998-2004 if it had known the riders were violating their contracts by using banned drugs and blood transfusions to gain an edge.

At issue today – is Armstrong’s request to dismiss the case altogether – his attorneys argue that the case is too old to bring under the statute of limitations and that there was no fraud because the government should have known Armstrong was doping but did nothing to stop it.

U.S. District Judge Robert L. Wilkins will hear arguments today  and is expected to issue his ruling at a later date.

The statute of limitations on such a case typically would be no more than 10 years before the time it was filed in 2010. Armstrong’s attorneys argued it should be no more than six years, which would prohibit all of the claims made by Landis and government. Citing the wartime law, Landis’ attorneys say Landis should be allowed to go back even further than 2000 and collect more damages if he succeeds in proving Armstrong defrauded and damaged the USPS.

"If there’s no statute of limitations, they can reach back as far as they want, and get as much money scooped into the pot as possible," said Jason Workmaster, an attorney who specializes in similar cases for the firm McKenna Long & Aldridge.

The scope of the wartime law on similar civil fraud cases is so contentious that the U.S. Supreme Court has considered reviewing it.

In the meantime, Landis’ attorneys are using it to argue that the clock started not in 2010, when he filed suit, but in 2001 when the U.S. went to war in response to the terror attacks of Sept. 11. They say the 2001 starting point would allow them to go back to at least 1998, when Landis started making specific allegations about Armstrong’s doping.

The USPS said it paid $40 million to sponsor Armstrong’s team from 1998-2004, including about $9 million paid from 1998-2000. If the clock only goes back to 2000, then Landis and the government would only be able to argue for the return of about $31 million. But if Landis wins his argument about the wartime suspension of time limits, the additional $9 million would be at play. Under the False Claims Act, damages can triple, so $9 million could be worth $27 million. As the whistleblower who brought the case, Landis could collect up to 25 percent of those damages.

"That’s the motivator (for Landis)," Anikeeff said. "It’s a bounty statute. He stands to gain a lot of money."

In 2010, Landis confessed to doping and said Armstrong also doped as part of a widespread doping conspiracy. Armstrong ripped Landis in response, sticking to the same vehement doping denials he had issued for years. But he finally confessed in January after being stripped last year of his seven titles in the Tour de France.

Though Landis and the government are on the same side in this case, they have made separate but parallel arguments. One big difference between the two is that the government is not making the wartime claim and says it is not seeking recovery for claims prior to 2000. By doing do, it is limiting the damages it can receive.

But Landis wants more. And Armstrong has asked the court to "stamp out his rebellion."

"The government chose not to argue that the war on terror and the second Iraq war distracted it from investigating doping by the United States Postal Service team," Armstrong’s attorneys stated in court filings.

"Landis asks the court to foist this meritless theory of liability on the government as part of his attempt to force the government to pursue tenuous theories it has chosen to discard."