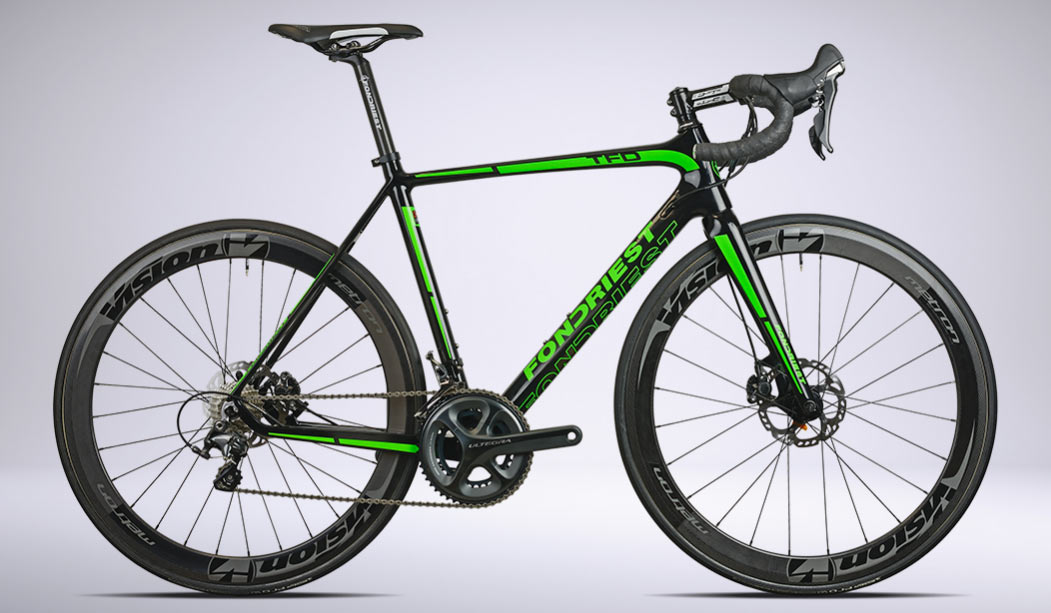 While the details are still forthcoming, the new TFD appears to borrow many of the features of Fondriest’s upper-end TF series, such as a tapered head tube, internal cable routing and compatibility with both electronic and mechanical groupsts.

In addition, looking at the photo, it’s apparent that Fondriest redesigned the chainstays, wherein they feature a lower profile before gradually sloping upward to where they meet the dropouts. This in turn, provides additional room to accommodate an inboard rear brake caliper. Furthermore, the TFD features an all new fork as well. Again, to accommodate a front disc brake caliper.

Fondriest claims the new monocoque constructed TFD weighs in at a respectable 9909g for the frame, and 380g for the fork.

At this time, Fondriest says they’ll be offering the TFD as both a complete bike, as well as a frameset only.

Thus far, the complete bike will be offered with Shimano’s Ultegra groupset, with a choice of either standard or compact chainrings, Shimano’s RS685 hydraulic disc brakes, FSA Team Issue handlebar and stem, Fondriest’s own carbon seatpost, Selle Italia SL saddle and Metron 30DB wheels – with a claimed weight of 15.65 lbs.

The TFD will be offered in 5 sizes, and available in the USA through through Albabici.