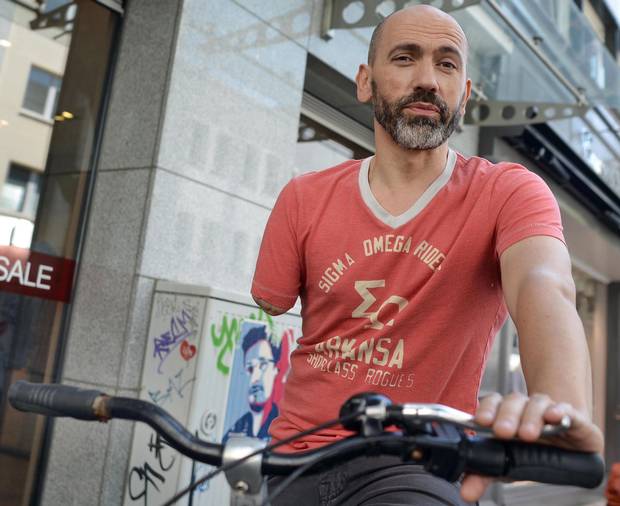 Police in Germany apologized to a one-armed man after an overzealous officer fined him for cycling while using only one arm.

Bogdan Ionescu, who’s a local worker in Cologne, gets around using a modified bicycle that allows him to operate both brakes – one with his foot.

However, on 25 March he was stopped by a police officer, who he says told him he was breaking the law.

Under German rules, bicycles are required to have two handlebar brakes. And, after a long argument along the roadside, the officer insisted that Mr Ionescu’s bike was not roadworthy and issued him with a fine of 25 Euros.

The incident was later investigated by the local newspaper, the Kölner Stadt-Anzeiger, which concluded that based on the modifications – the bike was in fact legal.

Last week police agreed to refund Mr. Ionescu – but disputed the figure to be offered. It said that while 5 Euros of the fine had been related to the “missing” brake, the other 20 Euros was for an allegedly faulty light.

However, Mr Ionescu did not let the matter lie there, saying that he was able to prove that he had always had two functioning, pedal-powered lights throughout the incident.

By the start of this week, the incident had attracted the attention of the  national press in Germany and even some news outlets in the Netherlands – sympathetic to Mr. Ionescu.

Finally, the police told the Kölner Stadt-Anzeiger yesterday, that they had offered a full refund, along with an apology to Mr Ionescu, with a police spokesperson saying:

“We only hope something like this never happens again.” Cologne Police also confirmed that the bike was completely roadworthy.

Saying that the case had weighed on him for weeks and that he believed he was discriminated against.

“It’s good that this is how it ends,” he added.