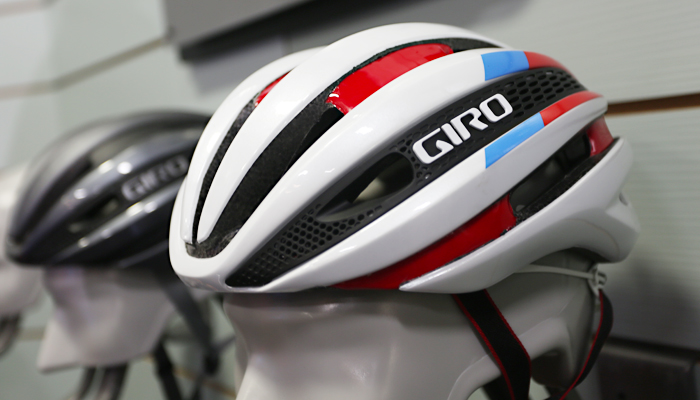 Earlier this week we reported on Giro’s campaign regarding a mystery product that touted to be "Lighter, Cooler, Stronger and Faster"- via some spurious photos strewn across Facebook. At the time, it was everyone’s guess that a new helmet of some sort was on the horizon.

Well, as of today, the mystery is no longer, as the brand officially announced the launch of it’s new Synthe aero helmet.

Giro is calling it’s new Synthe "the pinnacle of road helmet design”, with further claims that it’s almost as effective at cheating the wind as the fastest time trial helmets, while offering far greater comfort and ventilation. Thus, the buzz captions from our earlier article –  "16% faster, 13% lighter and 2% cooler".  We presume this is in reference to their previous flagship helmet ?  Which would seem odd, since their Aeon helmet has a claimed weight of sub 200g, while the Synthe is reported to be 250g ?

In any case, initial details show, that similar to the Attack, the Synthe will features Giro’s Roc Loc Air fit system, integrated mesh panels, lightweight webbing and docking ports for stashing one’s eyewear during a ride.

As of yet, there’s no exact word pricing or availability. But, one can be assured that it’s going to be something "%" more expensive than previous models.   😉