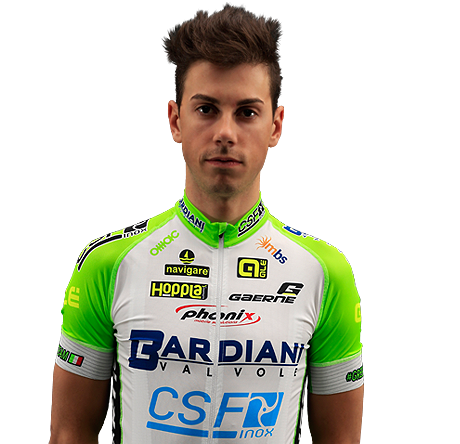 Marco Canola claimed stage 13 of this year’s Giro d’Italia today, in a sprint finish against fellow escapees Jackson Rodriguez and Angelo Tulik – following a 157 kilometers of racing from Fossano to Rivarolo Canavese.

Canola was part of a six man breakaway group that got underway early in today’s stage. However, over time the escape group was reduced to a final trio, who managed to hold off the peloton all the way to the finish – by a matter of seconds.

“I hope that this will be the first of many wins,” Canola said.

“I wasn’t in great form in the last stages, I felt that I lacked energy and my legs felt empty, but with that grinta, it pushed me through. I kept patient for this day, I got the right day.”

Meanwhile, Rigoberto Uran retained his position as the overall race leader, with a 37 second lead over Cadel Evans. Rafal Majka continues to remain in third place at 1:52 back.

With 10 kilometers remaining, the three breakaway riders continued to hold a 1:19 advantage over the main field.  However, in the closing 2 kilometers, the peloton began to up the their pace, with Garmin-Sharp and their man Tyler Farrar leading the chase.

However, even with a lot of jostling amongst the escapees during the final 750 meters, the field was unable to close the gap in time.

Coming out of the final right turn with 250 meters left, Canola opened up his sprint. Rodriguez in turn tried to match the Italian rider’s acceleration, but lost the sprint by a mere half a bike’s length. Tulik crossed the line a few meters behind them.

“We had a good group, I was close and I’m sorry not to pull it off,” Rodriguez said. “25 or 20k from the finish, we split it, we were all in agreement, to go for it and try to get the stage, we were confident. Thanks to everyone here, Gianni Savio, and everyone who believed in me.”

Today’s stage was once again inundated by foul weather. Riders like Vladimir Gusev and Thomas Dekker were impacted the most by the heavy rain and hail that pelted the race, when their rain jackets at different times got caught in their drivetrains.

In the case of Gusev, his mishap actually resulted in him falling. Fortunately, the Katusha rider was able to rejoin the race, after his team car supplied him with another bike.

At one point, the route became so congested by scattered debris, race officials were seen waiving a red flag at the front of the peloton in an attempt to alert riders of the dangerous conditions.

The Giro heads back into the mountains for the next two days, starting with tomorrow’s 162 kilometer stage from Agliè to Oropa.