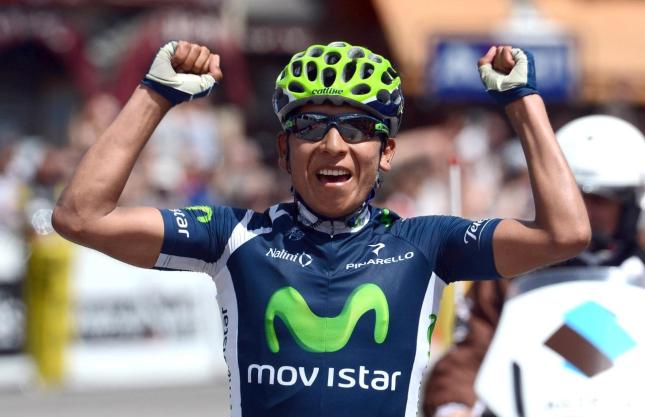 Quintana began today’s stage trailing Uran by 2:40. However, the determined Colombian rider ultimately turned that deficit upside down, after finishing more than 4 minutes ahead of Uran – who was dropped on the decent of the Stelvio.

As a result, Quintana now wears the maglia rosa, with a 1:41 over Uran. Meanwhile, Cadel Evans dropped down into third place in the overall GC – at 3:21 back.

Today’s 139 kilometer stage from Ponte di Legno to Val Martello brought the peloton over the two legendary passes, followed by the summit finish of the Val Martello – for a total of 4,300 meters of climbing.

Cold temperatures and snow falling on the passes, not only added to the already difficult challenge of the climbs, but perhaps more importantly, it made for some extremely hazardous conditions along the descents.

As riders clustered together on the Gavia, only one man was brave enough head out alone.

Indeed, Robinson Chalapud made his way through the brutal conditions, to establish a 30 second advantage over the lead group. Shortly thereafter, his teammate Jarlinson Pantano and KOM leader Julian Arredondo set off in pursuit.

Chalapud led over the top of the Gavia, followed by a cautious descent, with Arredondo cresting the summit in second place. But, despite their efforts, their time out front was short lived, as both riders were soon brought back into the fold.

As the peloton made their way down the tricky 20 kilometer descent, the field began to spilt up dramatically. Indeed, despite being a good descender, Cadel Evans found himself off the back of the peloton, along with Domenico Pozzovivo (AG2R-La Mondiale). Up front, Franco Pellizotti (Androni Giocattoli), Dario Cataldo (Team Sky) and Alexis Vuillermoz (AG2R-La Mondiale), succeeded in distancing the peloton.

By the time the lead group reached the foot of the Stelvio, their ranks had swelled to 10 riders, with an advantage of 2:38 over the chase. Chalapud, Pantano,  Diego Rosa (Androni Giocattoli), Robert Kiserlovski (Trek Factory Racing), Przemyslaw Niemiec (Lampre-Merida) and Herbert Dupont (AG2R-La Mondiale). Alexander Geniez (FDJ.fr), were some of the riders that made the juncture. However, their advantage would only hold for a brief time, as Tinkoff-Saxo and Nicolas Roche began to eat away at their lead.

At one point during the ascent, news began to filter through race, that the organizers had neutralized the descent. However, that rumor was later denied by officials.

As the chase group began to draw closer, Cataldo decided to try and make a go of it alone. From there, the Italian rider was the first to crest the summit of the Stelvio – taking the Cima Coppi prize along with him.

It was during the descent of the Stelvio, that Quintana, along with his teammate Gorka Izagirre, Ryder Hesjedal (Garmin-Sharp) and Europcar riders Pierre Rolland and Romain Sicard, managed to distance themselves from the group containing race leader – Uran.

Quickly thereafter, Quintana and his fellow chasers succeeded in joining the second group of riders. And, from there began reeling in Cataldo, as the race reached the slopes of the Val Martello.

With 18 kilometers remaining, and Cataldo insight, Quintana attacked on the first "big ramp", taking Rolland along with him – subsequently catching the Italian rider.

Initially, Hesjedal couldn’t match their acceleration, but quickly managed to drag himself back onboard with the leaders.

In the meantime, an isolated Uran had to rely on Tinkoff-Saxo and AG2R-La Mondiale to help him track down the leaders. But, despite their best efforts, the lead trio still continued to increase their advantage – with Quintana doing most of the work.

With 7 kilometers remaining, Quintana launched several attacks of his own. And, from there, the Colombian climber went on to distance his rivals by several seconds to claim the stage victory.