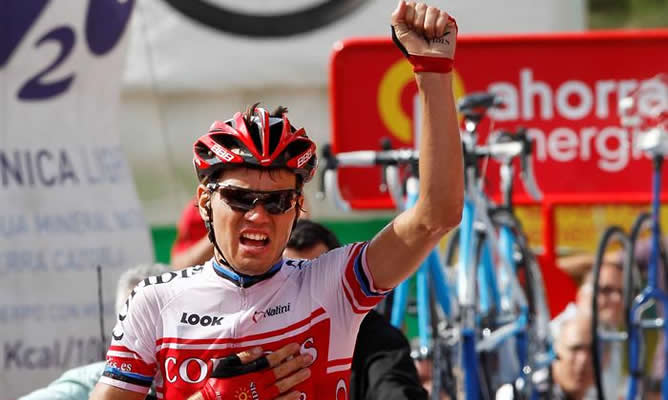 The director for this year’s Giro d’Italia is concerned, that when the Grand Tour gets underway next week with three stages in Northern Ireland and Ireland, there will be a notable lack of star quality in the 198-rider field.

"Absolutely," Giro director Mauro Vegni said when asked if he was upset about all the big names missing. "I’m not going to pretend that that’s not the case."

The two favorites who are entered for the May 9-June 1 race — Tour runner-up Nairo Quintana and Spanish rider Joaquin Rodriguez — have never won a Grand Tour.

Team Sky had initially planned to send Richie Porte, but then decided to move the Australian rider to its Tour squad after he struggled with illness early this season.

"Sure they had some problems but in terms of moving someone who was supposed to ride the Giro to the Tour, to be honest I didn’t like that very much," Vegni said in a recent interview.

"Vincenzo won the Giro in such extraordinary style last year that it’s only normal for him to try and win the Tour this year," he said. "I understand him."

Vegni is hoping that Brian Cookson, the new president of the International Cycling Union (UCI), speeds up reform of the sport’s calendar to make it easier for top riders to enter both the Giro and Tour.

"We need to revise the schedule to ensure that the best riders are racing the biggest races," Vegni said. "With the calendar as is, that will never be possible."

"As it stands now, for the most part whoever rides the Giro doesn’t ride the Tour, and vice versa," Vegni added. "We’re moving forward with the reforms but with great difficulty."

However, Vegni doesn’t have a simple answer for how to alter the calendar. For example, he’s not open to moving the Giro to earlier in the season from its usual May position.

"As is we already have a lot of weather problems in May, so earlier would be worse," he said.

Weather might be less of a problem if most of the race was held in southern and central Italy, with the key mountain stages in the Appenine Range, but Vegni doesn’t like that idea either.

"I don’t think the fans would accept that," Vegni said, pointing to the 2009 Giro, which had an atypical route. "The fans are used to seeing riders in the tallest mountains over the last week, where history has been made, on climbs like the Mortirolo and the Stelvio."

The grueling Stelvio climb is back for this year’s race after it couldn’t be used a year ago due to bad weather. It will come in the 16th leg from Ponte di Legno to Val Martello.

The penultimate stage 20 is expected to be the race’s toughest, capped by a super-steep finish up Monte Zoncolan. The race then ends in the northeastern port city of Trieste.

"The hope is that it remains competitive until the penultimate stage on the Zoncolan," Vegni said.

Vegni had been the Giro’s technical director before taking over full directorial duties when Michele Acquarone was fired at the end of last year during an investigation into the alleged misappropriation of about €13 million ($18 million) at RCS Sport, which organizes the race.

Acquarone maintains his innocence and has said he was made a scapegoat.

"Clearly it was upsetting for everyone," Vegni said. "It’s something that should not have happened and unfortunately it did."

It was Acquarone who coordinated the start in Ireland and now Vegni is in charge of finding new foreign territory for the Giro.

While he is committed to starting the Giro in Italy next year and in 2017, which marks the 100th edition of the race, there are numerous possibilities for 2016.

Vegni mentioned offers from Switzerland (Lugano and Mendrisio), Corsica, Belgium and the Netherlands.

The race finish could also continue to move, with the finale recently held in Rome and Verona.

"The finish is usually in Milan but it’s not a rule or something permanent like the Tour and the Champs-Elysees," Vegni said. "We have a lot of requests."

For now, though, the focus turns to racing and holding a doping-free race after last year’s edition was tarnished by three positive tests, from Italians Danilo Di Luca and Mauro Santambrogio plus French rider Sylvain Georges.

"There are still some stupid people out there. But it seems to me that compared to before there’s more awareness out there," Vegni said.

This year’s Giro is dedicated to Marco Pantani, as a tribute to the late Italian rider on the 10th anniversary of his death.