How to Prevent a "Wheelsucker" 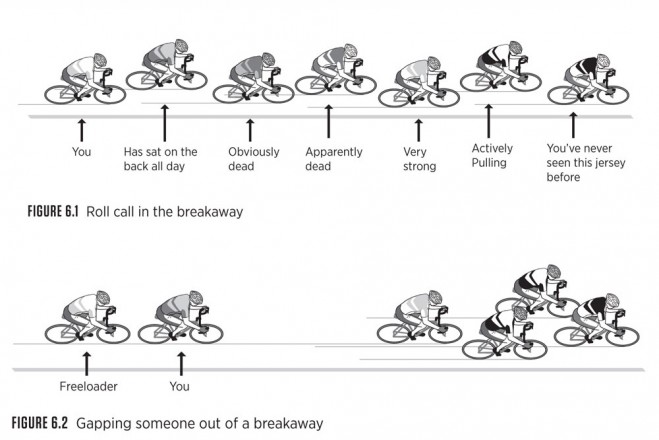 There’s nothing more annoying than a persistent wheelsucker. However, rider’s can take solace in the fact, that a new study shows how those willing to do their part "pulling the "front", can not only reduce the aero benefit being enjoyed by a pesky wheel sucker, but also  get a "boost" as well.

According to the study, a wheelsucker’s attempt at cashing in on your efforts, can be prevented if their front wheel is as little as 27.5cm to one side to your lead. Furthermore, by doing this, the study showed that a leader can actually experience a 5% boost in forward momentum.

During this scenario, the study showed that a wheelsucker’s advantage is reduced to a 20% increase in aerodynamics, as opposed to a 49% benefit if they’re allowed to follow directly in your slipstream. Meanwhile, the "aero boost" to the leader is barely effected.

So, if you’re in front and your rival won’t take their turn, try to keep changing course. They’ll have to work harder while still giving you a slight boost.

In addition, another finding that was uncovered during the study, was if a wheelsucker decides to "attack", it’s best for the leader to have as much distance between them as possible. For example, if 2 riders are racing shoulder to shoulder, each will be fighting 6% more drag than if they were side by side – 1.5 meters apart.

“The effect of spatial position on the aerodynamic interactions between cyclists” by Nathan Barry, John Sheridan, David Burton, Nicholas A.T. Brown was published in Procedia Engineering 72. And, the following abstract provides an interesting introduction to the study.

The Effect of Spatial Position on the Aerodynamic Interactions Between Cyclists

Aerodynamic drag contributes the majority of the resistance acting on elite cyclists. At speeds of 50 km/h, over 90% of an athlete’s power output is expended overcoming drag. As a result, reducing the drag of cyclists significantly improves their performance. To date research on cycling aerodynamics has primarily focused on a single rider, despite the fact that many cycling events are mass start or team based, which necessarily involve athletes travelling in close proximity. Fundamental investigations of multiple less complex bluff bodies have shown strong aerodynamic interactions that significantly affect the forces they experience. Whilst practical experience has shown this to also be true for cycling, such effects are not well understood.

This paper reports the results of wind tunnel experiments that measured the variation in aerodynamic drag for cyclists in various two rider formations. Both drafting and overtaking formations were investigated; being inline parallel and perpendicular to the flow respectively. Loads experienced by both riders were mapped as a function of their relative spatial position. Results show that drag and side force are strong functions of spatial position. For two riders drafting directly inline there was a maximum drag reduction of 49% for the trailing rider and over 5% for the lead rider. During overtaking a drag increase of over 6% was recorded with riders positioned side-by-side.