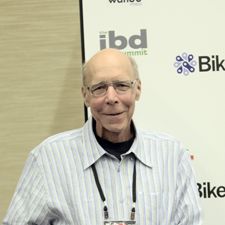 Ready spent most of his working years, from 1974 to 1997, in the bicycle industry—first in the publishing field then launching the trade show that would eventually become the largest in North America.

Ready got his start in the industry in 1974 as editor and publisher of “boot camp,” but it led to his fascination with cycling.

He later launched the Interbike trade show with co-founder and friend Herb Wettenkamp in September 1982. The idea to launch Interbike was sparked from a call with Jim Blackburn in early 1981. At the time, there were several industry trade shows, but they were all in the January through March time frame. And the industry needed a show in the fall, in the preseason.

The show drew some 150 exhibitors in its first year in Las Vegas. While it struggled in its early years, Interbike enjoyed good dealer turnout and through the years moved to Reno, Anaheim and back to Las Vegas. It also expanded to the East Coast with shows in Philadelphia and Atlantic City. Ready pegged much of the show’s success to the burgeoning mountain bike market in the 1980s.

But Ready was also credited with bringing big musical acts and hosting industry parties at the trade show. Among those who entertained the crowds were Merle Haggard, Jerry Lee Lewis, Bo Diddley, David Lindley and Los Lobos.

National Bicycle Dealers Association Fred Clement credits Ready with helping keep the retailer group afloat during a period of financial turmoil. Ready would donate the fees for onsite dealer registration at the Interbike show to the retailer group, Clements said. He eventually hired Clements to take over the NBDA.

Clements also remembered how Ready would sweat the details of the show.

Ready sold the Interbike show in the mid 1990s and retired, but found it hard to stay on the sidelines.

A motorcycle enthusiast, Ready collected and restored vintage motorcycles. He also piloted planes and enjoyed going on tandem bike tours with his wife.

He is survived by his wife, Maryann, his mother and sister, two stepchildren and two grandchildren.