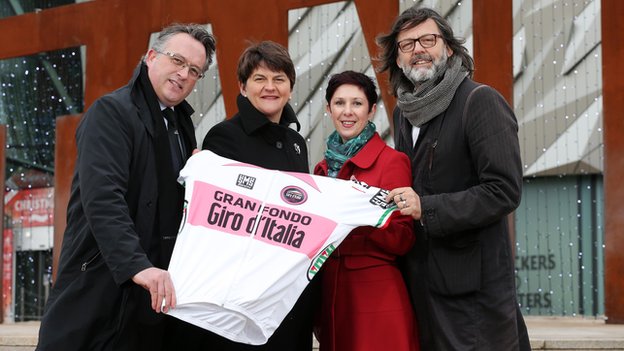 Gran Fondo events will take place in Northern Ireland for the next three years – as homage to the Giro d’Italia that captured the country’s  "hearts and minds" earlier this year, when three stages took place throughout the region.

The first event will be organized by RCS, the same organization that oversees the official Giro itself, with the first event scheduled for June 2015.

Riders will be able to choose between either a 177km or 59km route, which will start and end in Belfast, with pre-event activities scheduled to take place across Northern Ireland – the day before.

Up to 4,000 riders are expected to take part in the one-day event, which often attracts amateur competitors from across the world, along with some ex-pros and former stage winners themselves.

"The 2014 Giro d’Italia captured the imagination of the people of Northern Ireland and was hailed as a resounding success by the organizers  who were bowled over by the warmth of our welcome and enthusiasm," said Arlene Foster, minister of enterprise, trade and investment.

"Cyclists are now coming to ride the Giro stages and other routes across Northern Ireland and we want to capitalize on that interest.

"The Gran Fondo will establish a tangible legacy event to the Giro d’Italia and further increase awareness of Northern Ireland as a premium cycling and tourism destination, as well as having a positive economic impact."

"The event attracts amateur cyclists from across the world to the host country to participate."

"Following the great success of the 2014 Giro d’Italia Big Start from Belfast, in the amazing scenery of the Northern Ireland coastline, we are very happy to announce a new three-year partnership which will see a series of Gran Fondo Giro d’Italia events hosted in this fantastic country," said Andrea Trabuio, head of mass events, RCS.

"We are sure that this ‘made in Italy’ event will be a big success and will positively promote Northern Ireland."

"There will be strong engagement with the local communities, the event will pass through and our aim will be to create the ‘pink magic’ that was done so well in May during the Big Start," added Darach McQuaid, part of the organising team.