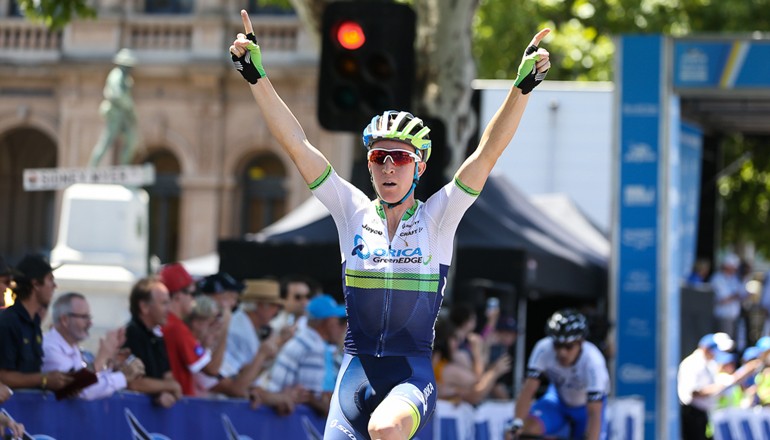 Cameron Meyer (ORICA-GreenEDGE) has put his team in the box seat to collect back-to-back Jayco Herald Sun Tour victories with his stage 1 breakaway win in Bendigo.

Meyer, a three-time points race world champion on the track, played the numbers game to perfection to outsprint breakaway partner Joe Cooper (Avanti) after 3:29:47in the saddle during the 146.2km stage from Mt Macedon.

The pressure will now be on ORICA-GreenEdge to defend Meyer’s overall lead right through until Sunday’s final stage which features three ascents of Arthurs Seat.

The pair were part of an initial group of 21 riders who broke clear on the first climb of the day up Mt Macedon, with Meyer and Cooper surging ahead with 10km remaining. Cooper’s Avanti teammatePatrick Bevin won the bunch sprint for third place, 10 seconds back, with the majority of the peloton eventually finishing over 25 minutes in arrears, including prologue winner and yellow jersey Will Clarke (Drapac).

Meyer said he was “very happy” with today’s victory, the first for his team in 2015.

“There was lots of attacks in the end and I just had to bide my time for the right move and I love that sort of race,” he explained. “Twenty guys just like it used to be on the track with the points race and trying to judge when to make the move and I made the right one.”

“I brought an Avanti guy which was perfect and he didn’t want to give me a turn in the last 10km which I got a little bit angry with, but I still managed to have enough in the end to win so I’m really happy.”

Bonus seconds on the finish line give Meyer a four second lead over Cooper, with Bevin another 11 seconds in arrears.

“ A hard week now,” Meyer admitted. “Simon Clarke did it last year and we’d love to do it again. It’s going to be a hard bike race. It’s still very close in the overall standings. I went and checked out Arthurs Seat, I know that’s a hard hill but I’m looking forward to the challenge,” Meyer said.

Going from the gun

Waved off by local school children in Mt Macedon, there was little time for games with a short circuit around the town before the first Budget Forklifts King of the Mountain climb began just over four kilometres into the race. Kane Walker (Navitas Satalyst) was the first man to attack, with CharterMason Giant’s Ben Hill attempting a chase but the attack was short lived, the peloton back in one piece by kilometer eight.

Power was the first man over the Mt Macedon climb, with Canty, Pauwels and Howson picking up the rest of the points and the gap quickly opening up to just under two minutes.

By the first Chain Reaction Cycles sprint prime of the day, another minute had been added to the breakaway of 21’s advantage with Summerhill, Shaw and Hamilton leading the way.

With Mt Alexander the scene of Simon Clarke’s surge to overall victory in 2014, the stage was set for fireworks once again this time around. With the break hovering at 3:31 over the peloton, ORICA-GreenEDGE again tried to split the group of 21. The efforts saw Howson struggle to maintain contact with the group, but his teammates Clarke and Meyer were attentive to any challenges with the Avanti quartet and Norris leading the charge.

Power took the opportunity to build on his earlier KOM points, guaranteeing he would pull on the Budget Forklifts Polka Dot jersey at the end of the day, with Norris, Bevin and Canty cleaning up the rest of the points.

“It’s pretty tough up there,” said Power of the Mt Alexander climb that boasts a gradient of 10% in parts. “We got halfway up and I thought ‘whoa’. It was a hard climb and I just managed to get the KOM, which was pretty cool.”

Norris, who hails from the nearby Castlemaine, was able to pull away on the descent, but he was quickly joined by 10 others: Clarke, Meyer, Pauwels, Pellizotti, Bevin, Torckler, Canty, Ferguson, Davies and Power.

Meantime, the pressure from the breakaway group on the climb had resulted on the gap to the main peloton expanding to just over eight minutes with 75km of racing complete.

The lead group was back together approaching the feed zone with refreshment on offer in the warm conditions, with the flat roads leading into Bendigo offering little respite. This too forcing the peloton to sit up after around 100km with the Sun Tour being decided 15 minutes up the road.

With 10km to go, Meyer decided it was time to make a move.

“My role was to mark Cam and when he went, I was able to respond and it was probably one of the hardest 10kms I’ve done,” explained New Zealand road champion, Cooper. “The plan was to try and keep it together for a bunch kick for Paddy .  The Kiwi’s tactics proved frustrating for Meyer however.

“I knew his situation, he had three teammates behind… But I was trying to encourage him to come through,” the ORICA-GreenEDGE rider said in explaining the exchange of words that took place over the lap of Bendigo.

Meyer led Cooper across the finish line on the first pass of the city, earning him the Frank McCaig Memorial Sprint prize. The long sprint down Pall Mall keeping the pair in view as Norris gave chase with the remainder of the breakaway. It was too little consequence, with Meyer and Cooper crossing the finish line 10 seconds ahead of the chase group, lead in by Bevin who was aiming to “sneak some bonus seconds that are probably going to count at week’s end,” he said.

With the race now in the balance, Avanti is likely to be on the attack before Sunday to try and bridge the gap to Meyer.

“I’m sure we’ll come up with some sort of plan to give me the edge a world class rider and hats off to him today he did a good ride,” Cooper explained.

“It’s not ideal to give away four seconds but we’re very crafty and we’ll conjure something up.”