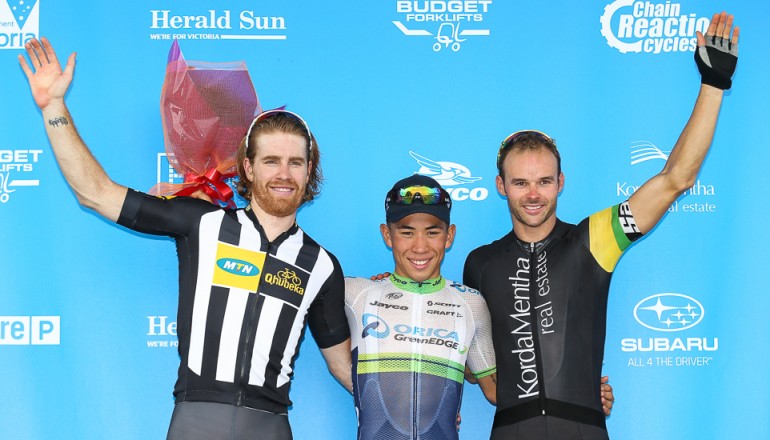 Caleb Ewan sprinted to a sensational victory on the penultimate stage of the 2015 Jayco Herald Sun Tour in Nagambie on Saturday; his second straight victory and third in as many days for his ORICA-GreenEDGE team.

Meanwhile teammate Cameron Meyer says he’s ready to defend his lead in what promises to be a tough final day on Arthurs Seat with 21 riders within 35 seconds of the lead.

“Same finish line and same result, I am really happy with both of them,” Ewan said following his latest win.

“It played out a little differently. It was pretty hectic in the final with the big wide road.”

ORICA-GreenEDGE teammate Cameron Meyer, finishing safely in the bunch on a crash-marred day, maintained the status quo in the yellow leader’s jersey with a showdown for the overall win looming on Arthurs Seat on Sunday’s final stage.

“There was a lot of nervous guys out there, I don’t know what it was,” said Meyer. “If it was that it was quite fast all day, they wanted to keep the break in check that’s for sure and they definitely wanted a sprint finish.  A lot of teams were very eager and I think that caused a few crashes out there.”

Today’s 146.7km stage concluded with an identical finish to that on Stage 2, with a hairpin bend inside the final kilometre to negotiate. Drapac’s Will Clarke was the first man around the corner, followed by KordaMentha but with 200 metres left to run, it was clear that Ewan was set for a repeat victory.

“I didn’t know what to think coming into the last corner because yesterday I was the first sprinter out of there and today I was a few sprinters back,” Ewan admitted. “It worked out actually alright; I got a pretty good lead out.”

Nervous energy all the way to Nagambie

The stage got underway in the genteel grounds of Mitchelton Winery and it wasn’t long after the flag brought an end to the neutral zone that the attacks began.

Ahead would be two intermediate sprints and two Cat.2 climbs, but the peloton made it clear that the breakaway would not be given a long leash.

Kauffmann took the points for the first sprint in Seymour, followed by Phelan, Copp and Bayly and shortly after with 33km of racing done, the breakaway had earned its largest gap of the day at 2:47 with MTN-Qhubeka and UnitedHealthcare leading the chase.

The six lost nearly 40 seconds as the first climb began, with the action back in the peloton taking its toll. Sun Tour defending champion and Meyer’s teammate Simon Clarke was the biggest casualty of a fall that claimed half a dozen riders. Clarke was unsure of what caused him to fall, but Meyer admitted that his teammate might have clipped his back wheel after hitting a pothole.

“He’s pretty banged up with a lot of skin off,” explained Meyer. “He had to sit on the back for quite a while to try and recover and get through the stage. He was on the front a little bit towards the end.”

Bayly would take maximum points over both climbs, to get within eight points of the Budget Forklifts King of the Mountain Classification lead, held by Robert Power (Jayco-AIS Australian U23 National Team)

The long run into the finish would see Power become another victim of a crash, losing plenty of skin off his left hip and an elbow that would require x-rays following the stage, explaining he was in a bit of pain.

“It’s just my elbow coming into the finish which was pretty sore so I’ll get an x-ray later on and hopefully it’s all good,” he said optimistically hopefully of being a contender for a stage victory on Arthurs Seat. “It’s going to be an awesome race tomorrow and I’d love to be there.”

There was plenty of jostling for position on the long, straight run into Nagambie with the breakaway still 20 seconds ahead of the peloton with five kilometres left to race. Shortly after, another crash brought several riders down, including search2retain-health’sAlistair Donohoe whose helmet was in pieces. The para-cycling world champion didn’t make it to the finish line and was taken to hospital with a gash to his face.’

Phelan did his best to maintain a gap on the field but was reeled in with three kilometres to go.

“We had quite a good group and we knew we just had to lay it down if we wanted to stay away,” he said having earned the Subaru orange jersey for the most aggressive rider. “It was rapidly coming down but all the boys really committed. Just at the end there I thought I would give it one last dig but I couldn’t pull it off.”

Twenty-one riders are within 35 seconds of the overall lead of Cameron Meyer heading into Sunday’s final stage of the 62nd edition of the Jayco Herald Sun Tour.

Meyer and his ORICA-GreenEDGE teammates are in the direct firing line from the Avanti squad with Joe Cooper still second overall at four seconds, and Patrick Bevin a further 11 seconds back.

Three ascents of the Arthurs Seat climb will decide who follows Simon Clarke into the record books, with Meyer expecting a war of attrition.

“Joe Cooper’s the closest,” Meyer said. “I would actually put Paddy Bevin as the biggest threat only because of his sprinting prowess. If he gets to the last 300 and really opens up I have to be on to that quite quickly. If he opens the gap and takes the stage win that’s all it’s going to take.

“Joe Cooper is more of a diesel and is going to go from a long way out,” he continued. “They’ve got a few cards where they can really draw me out and that’s where I hope guys like Simon Clarke and Damien Howson are able to nullify those attacks that Avanti are definitely going to give us I’m sure.”

Defending champion Clarke is fourth overall, at 19 seconds with Meyer hopeful of his teammate being able to bounce back from today’s crash.

“He’s definitely an important factor to our race and tactics tomorrow,” he admitted.

“I think we’ve still got two cards to play. I think Simon Clarke with no skin on; I still wouldn’t be letting him go up the road. Okay, they might put more emphasis on me but we’ll still have Simon Clarke.”

Drapac is also expected to be on the attack with their charge Lachlan Norris in fifth at 23 seconds.

“I think he’s got the legs to definitely jump some people,” he continued. “Whether he can catch Meyer out who knows but we’ll give it a go.”

Regardless of who will be making the move, Meyer has plenty of reasons to be looking over his shoulder if he wants to join the likes of Brad Wiggins, Simon Gerrans, Gary and Shane Sutton, Clyde Sefton, John Trevorrow and Russell Mockridge as a winner of the Sun Tour.

“A stage win on Arthurs Seat would be great but I definitely want to keep this first,” he said. “I think it will be quite a tactical race in some ways because there’s still 21 guys that are within 35 seconds. If any of them go up the road there’s going to be a little bit of cat and mouse.”