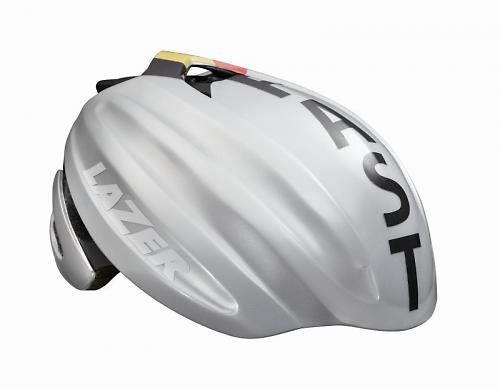 Lazer unveiled some of its range of road helmets for 2015, at this year’s EuroBike Show.

Starting with the range topping Z1 and Z1 Fast "aero" helmets, the main difference is that the Fast version features a removable Aeroshell, that riders can use for improved aerodynamics, or to shield out the rain or cold. Whereas, the Z1, comes with the Aeroshell in place, in order to satisfy UCI regulations.

Both models come with a hefty price tag of around $400, but so does the competition.

Look for Lazer to possibly add LED’s and a removable mudcap for next year.

The Blade is a new model for 2015, that features Lazer’s Advanced Rollsys System (ARS) fit system, which allows riders to adjust the tension via a thumb wheel on top of the helmet for "symmetrical tightness", along with a rear harness adjustment as well.

The Wasp is Lazer’s high-end time trial/triathlon helmet, which the Belgian brand claims is the fastest production helmet of it’s kind.

The Wasp has switched to Lazer’s Advanced Turnfit System for 2015, so riders can quickly and more easily adjust their helmet; particularly during race conditions.

In addition to the Wasp, Lazer has introduced another version of the helmet called the Wasp Air.

The Air essentially has a reduced-tail, that serves to mitigate drag in conditions where a rider is likely to be moving his or her head in different directions, as compared to a more rigid position undertaken during strict time trial events.

Lazer claims that the Air is nearly as fast as the Wasp. But, for those who opt for the longer-tailed version, Lazer offers a retrofittable short tail for owners.

Want more ? Lazer also unveiled its Wasp Air IS at the show.

While it’s still in the prototype phrase, when finished, the Wasp IS will allow riders to set their desired helmet angle, and, if for some reason, the helmet deviates from that position, riders will get a signal vibration informing them that the angle has changed.

Look to see the Air Is mid- season.

Lazer has expanded its line-up for 2015, to include the addition of a women’s specific range called – the MOi.

Lazer has taken steps to improve the aesthetics of the MOi, to shall we say – have a more feminine look.

Lazer is also quick to point out, that the MOi is "ponytail friendly", as a result of the position of their fit mechanism.

The range extends from the entry level Kiss, to the top of the line Cosmo, which shares many of the same details as the Z1.